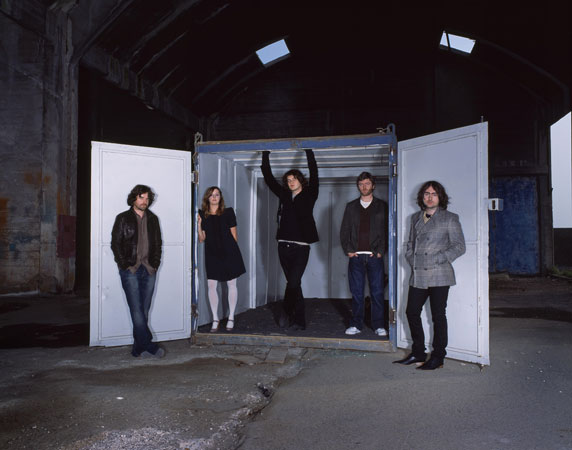 Four years ago a young saxophonist by the name of Abi Harding cut a demure and low-key figure on stage at Manchester’s Academy Three venue, as The Zutons were at the first rung in the climb to recognition, playing second fiddle to The Thrills. Little more than six months later, she rose out of her shell providing the party inducing touch and carefree enthusiasm for the crowd to feed off in a live environment and her voice appeared on radio more times than Terry Wogan’s. Well, four months ago in the Roadhouse in Manchester, as Liverpool troupe, The Sonic Hearts cut their teeth supporting Kubichek, flutist Kirsty Donaldson, looked as though she was figuring out what it was all about. Tonight, she shows that she has done this with natural ease and the band are about to release their first single on EMI (‘Hold On’, out on the 16/07/07). Orchestrating the crowd participation for most of their time on stage, most noticeably during the slow swaying, rumbling pop celebration of ‘Hallelujah”. The refined Donaldson cuts a free spirited and confident figure, allowing the wild mopped front-man, Sean Francis Butler to concentrate on his 60’s pop vocals and plugged-in acoustic guitar chugging.

It is Donaldson’s deft fluting that steers the outfit away from the path well-trodden by The Zutons et al, well that, and a deeper lyrical pit that gives Butler the feeling to instil into his endearing, laboured and positively tinged vocal thrust. ‘Crooked Hair’ is a self-deprecatory, climbing pop swipe at his own mop and it gives The Sonic Hearts a Universal kick. This could easily see them be the band to get EMI out of the financial doldrums that they’re currently languishing in.

Questions need to be raised about the suitability of the charming, LA homed acoustic conjurer, Jacob Golden’s suitability at fitting in between two sprightly full bands, as a bit of momentum is lost. However, the material on display from Golden, who released his debut album ‘Hallelujah World’, through Rough Trade Records in 2002, is whining, foraging and emotion laden enough to set a change in tone, but doesn’t cause attention to wander too much. Naturally, frivolous crowd chatter gives the personal nature of the material a neat ambient touch, as he slots in between the heart-tugging range of Joanna Newsome and the acoustic cruising of Willy Mason. The slow building weepie of ‘On A Saturday’, taken from the US cult classic The OC receives an enthusiastic reception. Goulden’s personal touch also wins him friends and implies that in his own shows he has the potential to be potent and captivating.

There are no two sides to Air Traffic, their uncompromising keyboard bolstered debut album ‘Fractured Life’ bears this point out. Tonight, with little fuss, they kick off through the climbing keyboard intro to ‘Just Abuse Me’ that builds into a melee of sliding guitar-led indie and switches back again to embolden their genuine, range flitting craft. Vocalist Chris Wall and co keep focused and bring their album foraging to the live setting. Wall cuts a stern and driven figure, as he sits in front of his keyboard sideways to the audience, glancing over approvingly at the bounding and pogoing taking place when numbers from the debut album are fired out with gritty belief. The Winding Travis kicked ‘Time Goes By’, makes best use of the pronounced sound in this quaint venue where viewing opportunities are at a premium. The lurid and catchy indie dirge of ‘Charlotte’, shows a searing seedy side that inevitably wins vast approval on a Saturday night. Air Traffic don’t do image and they don’t do pretence, yet their growing popularity is not in question tonight. Something that is surprising in this current climate, eh?