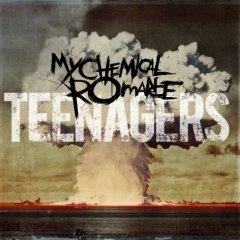 Teenagers marks the fourth single to be taken off My Chemical Romance highly successful “Black Parade” album. Produced by big gun producer Rob Cavallo (Green Day, Goo Goo Dolls), Teenagers is one of the clear stand out tracks from the “Black Parade” album. The single itself is short, concise and simply constructed, resulting in a very catchy My Chemical Romance release.

“Teenagers” is almost an anthem written for young rock fans, with front man Gerard Way providing a rant on society’s suspension of young people today; “They said all teenagers scare the living sh*t out of me”. He advises young people to, “Darken your clothes or strike a violent pose”; in the hope society will leave them alone.

The track itself has a strong seventies classic rock feel to it, which may appeal to classic rock fans, if they can get past the fact that it’s a My Chemical Romance release.

Following the success of the “Black Parade” album, the track “Teenagers” will surely enjoy lots of air play, and be constantly be streamed on the Music channels, ensuring its success amongst MCR fans.