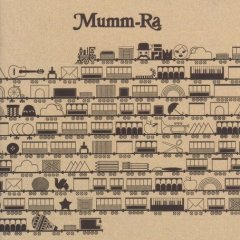 Mumm-ra – These Things Move In Threes

This band is one of those that come out of nowhere, but unlike the majority they surprised everyone with how fantastic they are. Mumm-ra prove that they are one of the most exciting bands of the moment with the release of debut album These Things Move In Threes.

Fresh-faced, NME darlings can have their sound described by the term indie-pop, but unlike all the debut albums released in the last year they really look worthy against them. Their quintessentially British indie pop sound really shines through on this album, to make it one of the stand out albums of 2007. Already.

Opening with Now Or Never, it demands your attention in a respectful, string-driven way, and gives a great advertisement to the band. It bursts in an explosion of life, setting you up for the rest of the album.

She’s Got You High screams Beach Boys in terms of vocal layering, a real song for the summer, while previous single Out Of The Question leaves you wanting more from ecstatic vocals and driving bass line, topped off with melodic keyboards.

Title track These Things Move In Threes delivers a perfect sound with a perfect breakdown. In fact you should be addicted by this point in the album. Song B another anthemic tune brings out the rhythm section and shows you just how good every aspect of this band is, and it is such a contradiction to the mellow, heartbreakingly beautiful Light Up This Room, which, instrumentally, builds up and up but never over does it to let go completely.

Starlight has to be yet another enormously good track. In a real tale of love, it has the essence to be a real hit. Sing-along choruses, handclap rhythms and yet it still retains its meaning.

To say this album is epic is an understatement, but the final track on the record, Down, Down, Down, is, well…truly epic. It is the epitome of fantastic and really finishes off the album well. It is mature and ambitious yet passed off amazingly by some of indie’s youngest and certainly newest members. It is an opulent end to a dazzling debut album.
It seems almost, that there is not a defining set of rules to this album, and that’s what makes it so appealing. It is an accurate reflection of modern music at its best, riffs that stadium stars would be proud of, yet with the remarkable fact that it is Bexhill’s superstars own.
The vocals are sound the whole way through, and the material is unique to Mumm-ra, and it seems that they have managed to get the balance of intellectual and tranquil music, yet with a rock and roll presentation, they have almost managed to create a new label of emotional indie. The charm that oozes out of this album is undeniabley a factor of why it is so good, but the songs themselves are fantastic.

“Good” just does not do this album justice. Mumm-ra have created what can only be described as a masterpiece on this must-hear album. It is a pretty good bet to say that by the end of the summer they will be the nation’s favourite band, and for good reason.