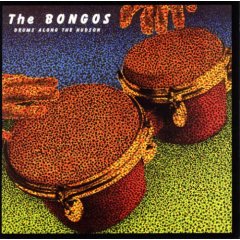 The Bongos – Drums Across the Hudson

A classic album from an American band who very nearly rivalled the best of what The Clash were about.

‘Drums Across the Hudson’ is widely regarded as one of the best things to have come out of the 1980s music scene. If you thought Blondie were out there, try this lot on for sighs.

Remastered and reissued with a remix of Bulrushes by Moby, this is one for the fans, and by no means insignificantly, an introduction to the band for newcomers (or is that latecomers?)

The 27 track album kicks off with ‘In the Congo’. It’s a dangerous song really, because the band sound a little loose and disorganised. It also smacks of that sickening 80s naivety which made it okay for The Human League to throw Lebanon in the title of a song, and affect some kind of very pseudo political stance.

But listen carefully, there’s a tight structure to the song, and some of the harmonies sound like something brought to the fore by the exquisite Pixies years later.

For the newbie ‘In the Congo’ may sound like a thrashed up mess, and they may also think they know what the band is all about. But like the Smashing Pumpkins, The Bongos are very adept at mixing it up. ‘Bulrushes’ is a melodic, pensive song which eventually explodes in a glorious and generous splatter of guitar solo.

Once you’ve cleaned yourself up you have the naïve, but direct attack on 80s greed – ‘Video Eyes’ to look forward to.

A real highlight, and a track which will ruin any preconceived ideas you‘ve built up so far in the track listing is ‘Certain Harbors’. It’s a great example of the band’s creativity and blends a beat poetry sax riff with surprisingly good harmonies and the familiar thrash pop sound.

I was quite eager to hear Moby’s take on Bulrushes, but aside from the odd laser sound effect and a few chorus delays, it’s nothing special, and I don’t think it adds to the album a great deal.

What it doesn’t do though is detract from a classic album, whose title suggests a war cry, when it’s nothing less than the distillation of the Eighties, conveniently poured into a nice neat little bottle and ready for drinking.