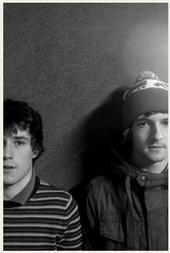 Manchester’s very own indie-emo darlings packed out the Night and day for an XFM music response night.

The first support band, Linda’s Nephew, aside from not getting much response from the crowd put on a distinctly good performance, with synth-tastic songs and amusing lyrics. They were followed by the Ting Tings, who, in my honest opinion are the next big thing. A boy-girl duo, spouting out vibrant songs in a complete mash of sounds, from B52s to Be Your Own Pet and Le Tigre style pop! The crowd was obviously desperate to see this band too, as there was a huge surge and it felt as though the bouncers had let in double the capacity, yet, despite this there was a distinct lack of energy.

The Maple State managed, as per normal, a stellar home crowd performance. Showcasing new songs and playing reconstructed, new versions of old songs, it was a real audience-pleasing gig. Not only did they play well, but also band newbie, Higginbottom, (guitar/vocals) really proved he was a worthwhile addition to the group, and really made for the wow-factor that once again TMS pulled off effortlessly. The shining new in-your-face wonderful 5-piece sound definitely meant that, yes, even if the crowd was mediocre, the set was far from it.