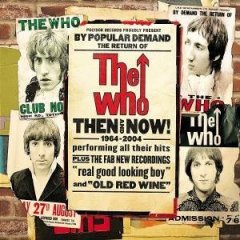 Funnily enough, I was only thinking the other day, that what this world needs is another Who compilation! Was I really you ask? No, you muppet, ‘course I wasn’t! There are mounds of them around already all with the best songs from one of the most important and influential British bands of all time and arguably the best live band in the history of rock.

Not only is this yet another compilation, but it’s a re-issue of the same compilation from a few years back! The single solitary reason for it’s reincarnation is to include two new songs from Townshend and Daltrey’s, still can’t quite understand why, resurrection of the remaining half of The Who. I can’t understand it because their body of work is impeccable as it was and would have been perfectly fine left for new generations to discover and enjoy as mine did. I always got far more enjoyment from listening to the fabulous records they made, seeing footage and hearing recordings and stories of how amazing they were live (my Dad saw them in Blackpool in 1971 – I’ve heard the stories a lot!) than I ever will listening to the considerably inferior new songs and seeing them struggle to put energy into a live set that is clearly beyond them – as it should be for gents their age, lets be honest. Plus the fact you really can’t expect to rebuild a band that has lost one of the all time great rock rhythm sections! Entwistle and Moon where the driving force behind that band, only a fraction of rock bands have since had bass and drum combos to rival them, Paul-Jones and Bonham for one. It has to be said that, as good as his – and he is good, but Zack Starkey is no Keith Moon!

The compilation is great, if for some bizarre reason you don’t have any Who records (and if you don’t you better have a bloody good reason why not!). All the essentials are here and then some. However, this only helps to show up the downfalls of the two new songs when they roll round at the end. ‘Real Good Looking Boy’ sounds like a cheesy Springsteen stadium anthem and opens with a solo piano playing Elvis’ ‘Can’t Help Falling In Love’ for some inexplicable reason. ‘It’s Not Enough’ feels like a Phil Collins 80’s snooze fest with Clapton on guitar, and if it weren’t for the sound of what’s left of Rogers growling tones, you would never guess it was The Who in a million years!

Strictly a collection for die-hard Who completists only. Having said that, if I was more of a die hard Who completist, I think I’d be much more inclined to add my tenner to my finding a copy of the ever so elusive ‘Who Did It?’ withdrawn mail-order LP fund, and probably steer clear of the new stuff – because I’m obviously going to have everything else on this CD in about six albums and four formats, so why I would need to buy this album is frankly beyond me.

The sort of album you buy your Dad for his birthday as a safe bet, but if he’s got any taste at all, then trust me, he’s got eighteen of the twenty songs on this CD already. Another pointless milking of a fat cash cow. Moooo are you! Moo moo, sorry I really just couldn’t help myself!