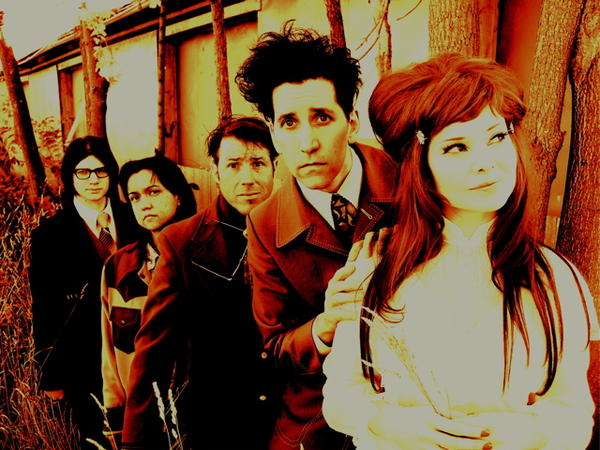 Opening band The God Fearing Atheists begin by teasing with promises of transporting us to Laurel Canyon before veering dangerously into middle of the road Counting Crows faux Americana. A strong command of their instruments and faultless sound do not divert from the fake American twang the lead singer manipulates his voice to produce and the lack of passion with which they perform.

And now for something special as five ghosts take to the stage- well five beings from a different era. An insane Daniel Day-Lewis look-a-like on guitar, a Gothic Dolly Parton on bass, a man head to toe in red plaid, a drummer obviously going horse riding after the gig and a banjoist who looks suspiciously like Jack Lawrence from The Raconteurs. Detroit based Blanche offer songs painting the grotesque South of William Faulkner, with the heated love of Tennessee Williams steeped in religious allusions all to the tune of a twinkling banjo.
Vocals are shared between husband and wife, Tracee Mae and Dan John Miller who look at times as likely to skelp each other as kiss, particularly when her husband interrupts the gig to have an impromptu discussion on the pronunciation of “River Clyde”. He receives what us Glaswegian’s would call ‘daggers’ from his wife. This tension, however, is perfectly complimented with the calm, nonchalance of Lisa Jaybird Jannon’s pared down drumming. Some problems with Tracee Mae’s mic result in frustrated faces from the singer and bassist but she overcomes them. Not a bad song is played but highlights of their vibrant set include Little Jack Lawrence led ‘O Death, Where Is Thy Sting?’
‘The World’s Largest Crucifix’ is the soundtrack of some deserted town with eerie harmonies and guitar’s stirring enough to awaken the dying memories Dan John Miller sings about. A truly beautiful song. Rolling Stones cover ‘Child of the Moon’ is languid and gentle, the complete antithesis to current single ‘What This Town Need’ which goes down a treat.
They finish with gospel inspired ‘I Can’t Sit Down’, a playful riot that sees the plaid clad guy leaping around the stage while receiving disapproving looks from his bandmates and eventually being commanded to sit down.
Blanche’s music is simultaneously antique and contemporary and despite her fragile appearance, Tracee Mae Miller’s words are fierce and seductive. Before launching into Gun Club cover ‘Jack on Fire’, she confesses she’s “too scared” to sing it alone and so recruits her husbands backing vocals as she sings, “I’m going to fuck you till you die”. But it is not to shock or titillate. It’s the juxtaposition at the crux of why their music is so compelling. King Tut’s was in witness of something very special tonight. Did I say that already? So what if I did. Their music is beautiful and envelopes you with a warm, familiar feeling and their live performance is demurely rowdy. Blanche are just what this town needs. In fact, what the world needs.