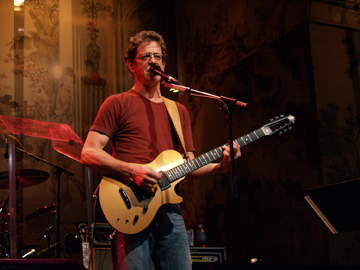 It’s the start of the Manchester International Festival and to celebrate an exhibition of Lou Reed’s artwork being shown in the city, a concert will run parallel that will overshadow anything Lou Reed is ever likely to achieve with brush, paint and easel.

This is of course a momumental occasion and the first UK performance of the album, Berlin, the follow-up to the ‘successful’ and ‘popular’ ’72 release Transformer.

To Reed’s left is an octet of brass and strings assembled from the London Metropolitan orchestra, to his right are ten of the London children’s choir. his band is assembled of musical talent. The only member to feature on the original recording is guitarist Steve Hunter.

Bob Ezrin, album producer is also involved in the shows production and this lends to some reasoning to the connection between the harrowing epic sounds of this album and Floyd’s The Wall.

This is Berlin in it’s full regatta, from the opening title track to the grand crescendo of Sad Song. Completed by the audio samples that stood out so prominently on the record, the chilling cries of children throughout The Kids especially cut nerves to the bone.

There is a quote by reviewer Douglas Wolk, “The album takes strength to hear, and rewards it.” Nothing could be truer of Berlin. It’s tales of violence, drug abuse and eventual suicide couldn’t be further from the almost upbeat offerings of Transformer.

This was a one-off performance, never likely to been seen again. Sure to bolster sales of the album, if allegedly production of Berlin hadn’t been discontinued by the label many years ago.