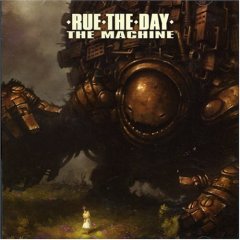 Rue The Day – The Machine

Rue the day have held a meeting, deciding to not fuck around and take some of the best aspects of the music they love and involve them in one of the most promising debuts for a band in recent years. Ok, maybe no real meeting took place-but certainly the mindset is prevalent on ‘The machine’.

Rue The Day spend no time coming out of ‘Intro’ into ‘Careless Talk’ -its old school maiden, early Metallica and Megadeth whilst still sounding modern in every thing from Bullet, Thrice and Trivium-how did they manage that? Even ‘Bullet Of Tranquillity’ throws a punch at U.S metal-it’s like they took the last 20 years in heavy music and produced a ‘best of’ soundtrack.

Not content with beating you senseless with their fists, just when you feel the assault will subside guitarists Dave Richards and Rich James turn up with baseball bats for surely the best song on the record it’s title track ‘The machine’. With a riff that steps in and on at 1:40 representing just how confident the band are-able to lock into grooves so fluently it’s almost unnoticeable until you realise just how much force propels the songs; this is going to torch rock club dance floors. Jack Clothier’s vocals are still clearly finding themselves, but it’s an enjoyable ride punctuated by several blinding moments-like catching the last taxi in the rain and finding a fiver on the back seat.

From the intro to ‘Ridin The Storm’ to the sheer velocity and discordant bite of ‘From the ashes’ Rue the day exude the kind of quality that simply impresses.

The whole package is wrapped up in Matt Dixon’s otherworldly artwork and it’s pleasing to see him move into the music forum, one in which you can see him doing particularly well in.

The criminal element here is that this is Rue the day’s first album, no scratch that, the injustice here is that you haven’t heard this album.