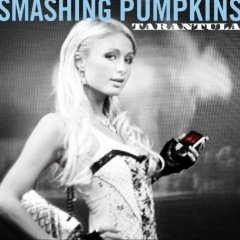 On Jimmy Chamberlain’s return to the band following his return from rehab and heroin addiction Billy Corgan said, “As soon as we played with Jimmy, we sounded like the Smashing Pumpkins again.” The days of Adore’s drum loops were thankfully over.

Next year will be the Pumpkins 20th year as a band only because Billy Corgan has never stopped writing songs. Whatever formation, whatever lineup he has put out records to varying degrees of success. Zeitgeist, due out this month will be the closest attempt to regaining the days when the Smashing Pumpkins were the best rock band on the planet, releasing Siamese Dream and the pretentious masterpiece that was Mellon Collie and The Infinite Sadness. Of course they’ll never make it back there again. That time has passed, things have changed.

Tarantula has everything, is unmistakably full on, makes you yearn to see them live again and builds expectation for the album release later this month. Full of extended snare rolls, reversed backing vocals and catchy punk riffs. A typical dream reverb laden moment, call it the middle 8, but best of all its James Iha’s signature guitar squeals, oh wait a minute this is new guitarist Jeff Schroeder. Once the lead is unleashed approx halfway through the track it doesn’t stop until the last note. Corgan has taken most of the lead guitar duties now.