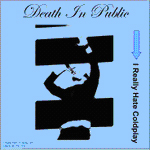 Well these guys seem like a band who aren’t ones to beat about the proverbial bush. Declaring their dislike of Chris Martin and co in such blatant fashion. The slight anti-climax after a song title that offers such a rant or Hip-Hop style dis, is that the small amount of lyrics the song has are buried under a wall of sound and whining vocal.

Opening with a tight rhythm section playing a signal of intent beat, then the thick with reverb, psychedelic filthy guitar kicks in and you think you’re on to a winner, and musically you are. Like a Rage Against the Machine bass line drenched in Sonic Youth guitar grime makes for a sublime mosh pit soundtrack.

The vocals though are a somewhat irritatingly high pitch wail, like Bret Anderson and Axl Rose having a girlie handbag fight. They are, for the most part, rendered fairly inaudible under a sea of swirling guitars, only the cry of “with Coldplay I would rather die” sticking through. For a song that makes such a bold statement with its title, it’s a shame it didn’t deliver more juicy abuse against the stadium fluff rockers. Or at least, a reason for why they hate Coldplay! Give us something eh!

There is much promise from Death in Public, musically they create scintillating, hard hitting alt rock of the highest order. But guitarist and vocalist Julian Dicken might want to consider turning this Lancaster three piece into a quartet by bringing in a new regulator for the vocal duties. His strength lies firmly in his epic guitar playing and unfortunately not his whimsical oral delivery.