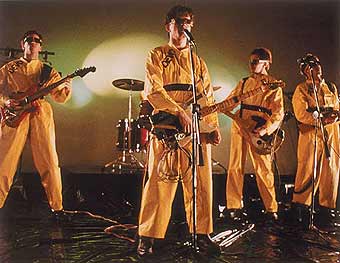 Muddy field with thousands of drunk scalies listening to radio friendly ‘noughties’ hits, terribly derivative scouse music and paedophile pensioners raiding their greatest corpses- or sat in the comparatively lush comfort of the Apollo’s fully seated venue. Gone is the sick and beer drenched wooden floor when people with proper jobs want to go to see a band, there’s no stoners stumbling round or drunk kids lying on the floor either. Instead a crowd largely over 45 years old mull round dressed in £18 a piece replica red hats. Also gone, sadly so, is the bar? Strangely it isn’t opened in the main room and the one to the left of the stage closes as soon as Devo appear, a boo.

Anyway Scanners kick off proceedings with their boy-girl, boy-girl alterna rock. They have a good sound but their tracks lack a depth and an edge that their style demands, vocalist Sarah’s performance is entertaining but her band lack any star quality but that will probably guarantee them a large deal and multiple hits in such a stifling musical era we live in. Hopefully they will grow or maybe this was a poor show but they do have potential. So back to the good old days when people where creative, wanted to entertain and men in bright yellow nuclear protection suits and plant pots on their head could have hits.

Devo take to the stage on their allotted stage time following the video introduction and Devo ‘Corporate Anthem’ on a large screen behind the stage, and the packed throng stand to give an ovation to their geek heroes. Devo might not be a household name but their influence can be heard in both modern indie and dance music acts. Their two biggest hits are still indie dance floor favourites and as they spew out their set in at a furious pace they play both ‘Girl You Want’ and ‘Whip It’ in the opening half a dozen songs. Such an act of unprofessionalism would be ludicrous if they didn’t have both a) enough better songs to fill out the set and b) such a die hard fan base. The Devo collective wore t-shirts showing the last date they played in Manchester with pride, and wouldn’t you if it was 17 years ago!

Throughout the concert the polite seating provisions were ignored as the throng chose to stand for the entire show and danced to every song like it could be the last time they get to see it. This could be the case as the band aren’t getting any younger and apart from the super fit younger session drummer Josh Freese (who has been a member of The Vandals, A Perfect Circle, Guns N Roses, Nine Inch Nails and err Avril Lavigne, Kelly Clarkson and Lostprophets) and guitarist Bob Mothersbaugh who looks exactly the same now as he did in 1978, an image helped by the fact he still uses his trademark guitar. Meanwhile lead singer Mark Mothersbaugh looks like a fat middle aged Timmy Mallet, second guitarist Bob Casale looks like recently deceased Boris Yeltsin. Half way through and they rip off their outfits to reveal their second trademark look, the knee padded shorts and t-shirt outfit captured in the ‘Whip It’ video. To the delight of the crowd they throw these.
Devo burst through tracks including ‘Mongoloid’, ‘Secret Agent Man’, ‘Freedom of Choice’ and ‘Come Back Jonee’, ending with Mothersbaugh donning the classic Boogi Boi cap and mask and singing ‘Beautiful World’ while bouncing green balls off the stage into the crowd. Tonight in rainy Manchester the concept of DEVOlution was shown to be glorious.