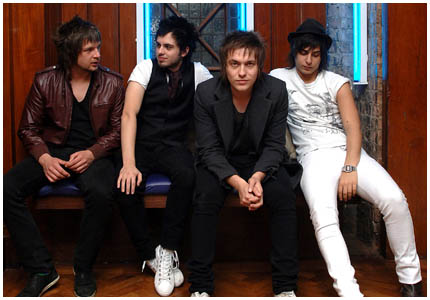 We’re in the City, in the city tonight! The Electric City’s debut single Sleeping with the Enemy – released July 9th on their own label ‘Distorted Punk’– isn’t subtle and it certainly aint soft. A real grizzly but euphoric rocker is made for the moshpit of every dirty dance floor in the city. They have the huge slick arena sound down to an art. There is definitely something of the Foo Fighters to them. The B side Electric City is even catchier – a downright groover, which keeps driving on with James Cantone’s lead electric guitar producing one of the riffs of 2007. It starts with real paranoia only added to by lead man Andy J Taylor’s lyric “the future’s unclear, the damage is done” but builds into the excitement and feel good dance of a night on the town, “electric city’s alive…light up electric city! This night is on!” A macho Franz’s Take Me Out that could easily be a single in its own right.

The mix of heavy rock, art-rock and electro beats has taken them to the top quick. Having already supported We Are Scientists, Patrick Wolf and the Futureheads they now head to Spain for festival slots at Bennicassim (July 22) and Ibiza Rocks where their star will get brighter. See them before they really take off at one of their small UK gigs scheduled for June and July (listed below). Live they are even more exhilarating than on these classic punk singles, their intensity and passion shines out. These lads are for real, as Andy says “If you’re going to do it you should just be yourself and embrace that – enjoy it. We’re not in it to rich; we’re doing it because we love it.” At this rate they can have both.