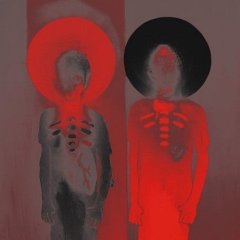 I first fell for UNKLE when I heard ‘Nursery Rhyme’ with Badly Drawn Boy, taken from their mass audience pulling LP ‘Psyence Fiction’. Amazing! And another thing! They never fail to treat us to a nice list of guest appearances. Past contributions have come from Richard Ashcroft, Jarvis Cocker, Thom Yorke and Ian Brown to name but a few. War Stories, their third studio album amidst the many LTD live LPs they self finance and knock out for silly money is no different and features Josh Homme, Ian Astbury, Duke Spirit, Gavin Clarke, Autolux and 3D. The Japanese import offers up 2 bonus tracks with Lee Gorton and Alice Temple. So, can I justify my ever slipping faith in the UNKLE sound that for me has gradually lowered in quality and importance with each release? Let’s see.

Is that Mr.Eko from ‘Lost’ welcoming us to the new LP from UNKLE? Who cares! Track 1 is over in 22 promising but unyielding seconds. Not the most awe inspiring way to open an LP. And though I didn’t, I should’ve taken that as a warning sign. The UNKLE sound is present throughout this album. However, amidst the appropriately intermittent cacophonic music, magnificent crescendos that build to introduce urgent and engaging kick ass vocals aren’t commonplace. Not today folks, no siree! The structures are there, but the unimaginative music really drags down any performance provided from their collaborators. There’s a sense of suppressed force and energy that the songs just can’t channel, with each track seeming like a tweaked and tired duplicate of the last.

Amidst the few highlights to be found are late on in the LP. Track 9, ‘Persons & Machinery’ with Autolux, is refreshingly upbeat and, in some moments, light and akin to an ‘Air’ track. Track 11, ‘Morning Rage’ features a debut vocal by James Lavelle and is surely the long lost lovechild of the ‘Foo Fighters’ ‘One by One’ track. That aside, it provides a good (damn I hate using that word ‘good’, but I just can’t bring myself to use anything stronger) uplift towards the end of a disappointing and average album. Even the LTD bonus disc of instrumentals feels like an attempt to get fans to send in their own remixes and vocal attributions, as so many fans have done of late for Nine Inch Nails and their ‘Year Zero’ LP.

In the past, UNKLE have always managed to capture the vibe that comes with working alongside the chosen few they have welcomed into their circle. But apparently, that was all in the past. Sure, they’re not dead, but how long Lord, how long? How long can these guys sponge the UNKLE image and it’s worn down style and sophistication? Anyone supposedly in the know is gonna have to suck it up and smile as they listen to this, ignoring that little voice yelling out from within, for either of their earlier LPs to be heard instead. This is a return to form in the same way ‘Massive Attack’ returned to form with their disappointing ‘100th Window’ LP. It’ll still be applauded I’m sure, but only by those cool cats ‘in the know’.