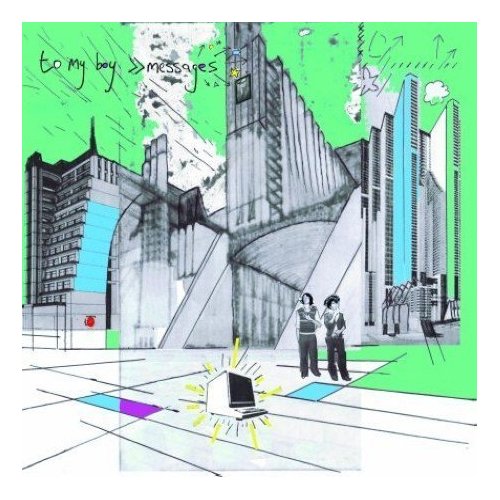 To My Boy – Messages

To start off it has to be said that To My Boy are not your everyday run of the mill band, they’re a much more interesting proposition than that. You see this Sheffield / Liverpool duo don’t really fit perfectly into any current scene even though some have lazily attached the ‘Nu Rave’ tag to them previously.

This there debut album like any Airfix model you probably received as a child is both intricate and not exactly straightforward instant throw away pop music. It’s much more complicated than that and takes several listens before the magic hidden within really starts to take hold.

There are traces of Sparks, Kraftwerk, Polysics, Devo, The Pet Shop Boys and even Clor littered though out the 34 minutes running time which seems to speed by extremely quickly.

Opener ‘Tell me computer’ kicks the album off to a good start with an arpeggiated keyboard that is very 80’s sounding. Like most of the album this song has at least one foot firmly placed in the past, while the other is placed just as firmly in the present.
It has computer generated beats fighting with disenfranchised vocals and electro style synths with the odd occasional burst of abrasive new wave sounding guitars thrown in for good measure and which helps to stop it all becoming a bit too repetitive and predictable.

But it’s the lyrics where they To My Boy really come into their own and that separates them from the many other young pretenders out there. These lyrics have an intelligence and a humour to them which could be easily mistaken as obsessive geeky ness and which is a thing that is missing in most modern day pop. Music does not always need to be simple and dumbed out three minute three chord songs and the use intelligence in pop is not always a bad thing.

The appearance of musical duos is becoming more and more common everyday, once it was four then three became the magic number and for the time being at least two looks like it could give it a very strong challenge.

To My Boy are not the future of pop and they’re too idiosyncratic to be taken to the hearts of a lot of people out there but they have delivered an album of both retro and electro tinged tunes that will captivate the more adventurous listener.