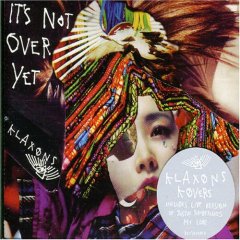 Klaxons – It’s Not Over Yet

It is often the kiss of death for a band to be associated too strongly with a fashionable scene.

Being lumped into a bracket with a crop of other bands for the NME to write about and praise the beginning of a new movement may work fine until they create another ridiculous genre and you are yesterdays news.

Klaxons met this branding head on, arriving touting a new genre for the NME to run with and an aesthetic style that has shaped the current stock of topman.

But what about the music? The band now laugh off the nu-rave tag and discourage glowsticks, so it seems strange they choose to release their cover of rave classic ‘it’s not over yet’, the screeching acid tinged synth heralds the song into action before chopping to the vocal laid bare over minimal guitar chords and drum beat leading into the stupidly over the top, clubland chorus, so many elements of this cover scream novelty but also fills to the brim with feelgood, whether its re-living and re-loving those original rave days or the joyful youthful passion for new bands and live music.

They are certainly not stupid, after breaking free of their own self-created scene as it swallows up other bands, klaxons unleash their radio friendly unit shifter into a mainstream that was already under their spell when it was happy to have the dark and un-commercial ‘Magick’ played on daytime radio.