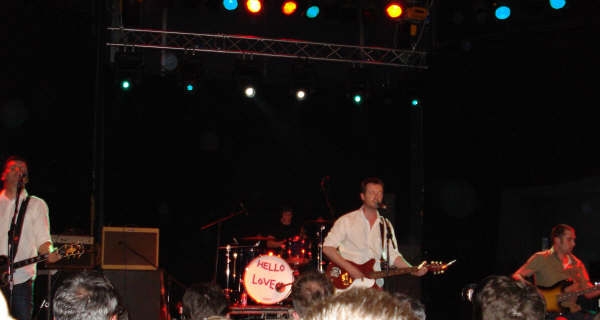 Tonight was the Broken Family Band’s homecoming. Not headline news but for Cambridge this has been a long time coming. Forget Pink Floyd, Steven Adams’ Broken Family are the finest band to ever come from our not so exciting city. This gig couldn’t have been better; it was one of those that left you feeling full of passion. They have four albums to draw from and the Cambridge audience, not quite filling the venue, knew the lot. The latest release Hello Love looks to be the spark to success; they’re not tacky enough to sell millions but this has finally caught the imagination to send them alongside other alternative heavyweights. Despite the back catalogue they have still to play a full national tour because of their day jobs and their complete disregard for commercial success. They are more concerned with making lasting music.

Steven’s complete likeability and natural affinity with the audience makes them even more special live than on record. While the support act the Folk Orchestra was making us cringe, asking the crowd to stop chatting amongst themselves, the headliners’ audience were hanging on every word. The banter between songs was perfection, Adams’ wit as sharp as any stand-up. “Turn the lights around on the middle. That is a very ugly group of people!” Heckler, “Yer, cos you’re so good looking!” Deadpan, “Thanks very much.”

In Song Against Robots and especially Hey Captain Adams’ other worldly sound and lyrics recall Grandaddy at their most euphoric. “Don’t be afraid of what you’ll get, I know now is not the time to hide, your insides will glow, and the light will shine directly out of your eyes, hey Captain! all of us on board believe in you, we all believe in you.” The musicianship is now so faultless that each change of pace and volume draws you further into the moment. Despite the huge variety they are never kitsch. The passion of heavier sections comes out in vocal, guitars and drums and is not “weedy” as they have been accused. Like the Brakes, BFB are blasting a grunge take on the American country sound. Adams voice is something of unique beauty, as he sings and hollers his voice cracks into a Give Blood style yelp. It will be the sound of this festival summer.

Give and Take and Seven Sisters provided the show’s highlights; Jay Williams’s electric guitar almost whispered as it rose above Adams’ beautiful lyrics “This here, this is perfect, and you there you’re perfect” and like New Order on Power, Corruption and Lies is music at its best, subtle but powerfully uplifting. When the volume rose and the pace quickened it was almost as impressive because it is so unexpected. There are still mediocre moments and Love Your Man Love Your Women is not their usual quality, “You’ve got more than enough but you still want more stuff.” But other songs from the new album are enduring, Leaps and So Many Lovers real highlights of the set.