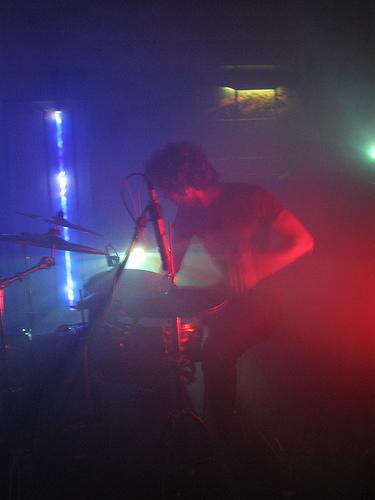 In a city that never sleeps, for a 12;30am stage time you need an outfit that can create intrigue and give off energy in the same quantity and there is probably not a new band around today, as well qualified in those stakes as Brooklyn, New York duo Shy Child. Incongruous, but energetic and captivating, skirting towards the funk disco rock of The Rapture and swinging back into a range of Whirlwind Heat musical spasticity and rawness, keeping the crowd on their toes. ‘Drop The Phone’, stands out for the lurking vocals of Pete Cafarella that have more than a hint of Eamon Hamilton (Brakes) to them. The catchy Friday night flavour is conjured up with ease, ‘The Noise Won’t Stop’ and it is this number that will win over trendy folk, like many of those in attendance tonight.

Those who thought that The Horrors had energy and a slightly off-kilter slant, but wanted them to go further and then further again, stand by looking impressed and shed inhibitions like a hermit crab sheds its shell. Cafarella’s keytar coaxing has broadness, range and more than enough volume to match the shattering beats belted out by percussionist, Nate Smith. Also, sampling has been turned into an art-form to make this duo bold to the point of garish. The seeds they scattered in support of Klaxons recently are growing like weeds, uncompromising and taking the direction you would least suspect. Given the fact that the plush decor, adding to the quaintness of the KoKo attracts visitors just to experience the place alone, the crowd are focused and largely into it all the way through. This duo is set to be one of the surprises of the year, possessing determination and an eye for the unorthodox. People are becoming ever-ready to shed the straight jacket of organization that is increasingly controlling our lives and Shy Child are definitely all for that.