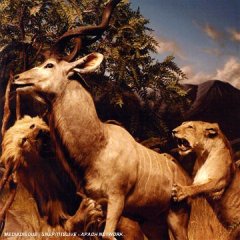 Interpol – Our Love To Admire

Interpol’s first 2 LPs, ‘Turn on the Bright Lights’ and ‘Antics’, both influential and inspirational and both serving as reminders as to why we all dig music so much. Almost each and every drama-derived track holds unlimited scope for its influence and effect. So, after the painfully long 2 year wait since their 2005 remix EP, Interpol are back with a new label and a new LP. Oh yeah!

‘Our Love to Admire’ kicks off with Interpol’s instantly recognisable sound that mercifully carries a non-engaging failure of a song to its Interpol hungry audience. Come on guys, step it up! I know we’re only 1 track in but I‘m an eager beaver who’s waited and waited for this! Feed me Seymour, feed me! A sense of dread and confusion is closing in on me by the end of track 2, another average track that only hints at any of the expected urgency or drive that we anticipated. Where are the clever lyrics, punchy drumming, heavy bass or catchy riffs? Well, track 3 diversifies little from its predecessors, making us restlessly hold out for the first single to be taken from this LP. ‘The Heinrich Manouvre’ was an obvious and natural choice for a single release from this as yet lacklustre LP. The combination of its definitive lyrics and infectious tune offers up a much needed glimmer of hope. The Interpol vibe escalates as we hit track 5, allowing us to relax somewhat and to finally abandon the ever dispersing disappointment that remained from the 3 opening tracks. Come on Ant; don’t write ‘em off just yet!

Yeah yeah yeah. I just can’t shake the horrid feeling that this LP is predominantly filler with very little killer left to hit home and force us to absorb something from these meandering and misguided messages. Our next highlight comes with the plod along track 8, ‘Rest My Chemistry’, accessibly ambling along on its predictable way. ‘Who Do You Think?’ follows, another upbeat and attention drawing track that does nothing but good for this confused and conflicting release. With only 2 tracks left to go, I already know that if this LP is going to succeed on good old merit and refuse to cash in on the Interpol name alone, it should be recognised as one of the fastest selling slow burners in recent rock history.
After all, everyone has a special place for Interpol in their lives, right? I guess we’ll see when this LP slouches down the charts after an initial 14 day stint toward the top!

Yes they’re back, but to what avail? New dimensions creep into the familiar mix with keyboards and casual crooning adding to the sound. But, there’s no sinister undertones, no menacing mood, no epic vitality. To summarise, it’s not the return I’d hoped for and I just don’t think it’s gonna cut it. Oh well, I guess you can’t have everything can you?!