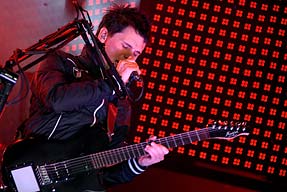 Roving reporter Owen McKeon was in Poland for this year’s Heineken Open’er Festival. He survived, the main thing, and lives to tell the tale of a European festival that proves cheaper than a can of lager at a UK festival but what is good enough to tempt UK festival goers away from the big festivals over here?

Arriving at noon on Thursday to put up our tents with roughly only as many people as would fit in your local Barfly seemed instantly a bit weird. We wandered down to the festival entrance proper and were told by a security guard the grounds weren’t ready yet. “Come back… er, tomorrow morning. Maybe.”

The shop in the camping area wouldn’t even open until later that evening. No food, no drink, definitely no campfires. Now I’m not saying this was similar to the Nazi concentration unit of the 40’s but… well, yeah that’s what I’m saying.

So the Poles can’t organise a festival, that was quickly apparent, and Open’er isn’t exactly the biggest of festivals. One main stage (pretty damn huge though it is), a dance tent and a new bands stage is the lot. There is not even that many stalls or bars and shockingly if you fancy a bit of alcohol to get you through until the big bands start at 9pm your options are Heineken. And that’s it. Ah how we love sponsored festivals.

Anyway music is why the thousands of, annoyingly, mainly British fans fly out to the North of Poland every year and in this respect Open’er didn’t disappoint. There’s no strength in depth in the line-up in the slightest, if you don’t like the headliners you’re screwed, but luckily those headliners included Bjork and Muse. The first day was split evenly between Sonic Youth and The Roots, both were decent if a little disappointing, but the annoying hour and a half set for every band was already wearing a bit thin.

Day two shat it down. Proper torrential piss. Everyone wandered around in free pink rain macs and Polish girls presumed us English guys must be best mates with Matt Bellamy. Obviously. They even touched our penises just in case. Groove Armada weren’t enough of a tempter for us to leave our covered deckchairs by the bar but the Beastie Boys got us wandering the 100 metres or so to the main stage (this festival really is tiny). The Beasties were up to their usual tricks and a hits-packed set ended with ‘Ch-Ch-Ch-Check It Out’ and ‘Intergalactic’ and finally the crowd seemed to be enjoying themselves.

One am came, the rain stopped and on rolled Muse. My, oh my, I’ve seen some light shows in my time but Muse take the piss. Up until now no-one had had any more props on stage than a banner declaring simply ‘Beastie Boys’ but Matt and the fellas had rows and rows of the buggers and suddenly we realised that this festival had been worth it all along. ‘Time Is Running Out’, ‘Newborn’, ‘Plug In Baby’ and ‘Supermassive Black Hole’ were all suitably gigantic but ‘Starlight’ was the pick. Huge 100ft, maybe 200ft, bees flew into the screens across the stage and then some robot-transformer guys bounded around from every angle. Set-closer ‘Knights Of Cydonia’ was also extraordinarily huge. OK, its massive on record but when played out in front of 60,000 sodden, drunken Eastern Europeans it became something else entirely. The perfect end to a day that could so easily have been a disaster.

All along, Sunday’s line-up was the best of the weekend. Polish bands filled the afternoon from Me, Myself and I (odd, and generally shite, beat-boxing), Andy (three cute girls, odd), Gentleman (the new Snow Patrol? Unlikely but not too bad at all), Dick 4 Dick (the self-proclaimed home-grown Red Hot Chili Peppers) and Poland’s 2nd biggest band, Idios Bravos, who opened the main stage at 7pm. Their, again odd, mix of reggae, funk and Indian dancing went down well with the local crowd but for everyone else it was merely a case of waiting for Bloc Party. They came on to cheers even louder than Muse received and they went down an absolute storm. Opening with ‘Song For Clay (Disappear)’ and following up quickly with ‘Waiting For the 7.18’, ‘Hunting For Witches’ and ‘The Prayer’, almost all of their excellent second album was played in their 80-minute set. Kele tried climbing a stage ladder during ‘She’s Hearing Voices’, quickly realised he was shit at sports and instead jumped into the crowd. Some Polish rapper clambered on stage, seemingly to the surprise of Russell who looked like he’d never seen him before, and may have been from last night’s band O.S.T.R. but no-one really knew. As Kele said, “A very unlikely collaboration”.

Bjork was the most eagerly anticipated act of the weekend and for most of the set she didn’t disappoint. Classics like ‘All Is Full Of Love’, ‘Venus As A Boy’ and ‘Pagan Poetry’ were rolled out brilliantly, as were highlights form the new album like ‘Earth Intruders’ and, in particular, an amazing, set-closing ‘Declare Independence’. The only blip in the gig was her decision to change ‘Hyperballad’ from one of the greatest singles of the last decade into a sodden, piss-poor excuse for three-minute’s ‘entertainment’. It was shite. To even call it ‘Hyperballad’ makes me angry.
Damn you scary swan dress lady. Anyway after a quick beer, two minutes sit down and a bit of composure we tracked back for the last band of the festival, LCD Soundsystem and bloody hell they’re good live. You don’t realise how many great tunes they’ve got until they’re played out non-stop in a ninety-minute set. They even had the balls to throw away ‘Daft Punk Is Playing At My House’ in the first twenty odd minutes. James Murphy may be a big sweaty fella but Christ he can scream his heart out, no other band this week came close to matching them for passion and emotion and, amazingly, no other band came close to matching them for crowd response either. They [LCD] may well have stolen the whole show from Muse without them even noticing.

So Open’er, did it work? In terms of bands and music, yes, yes, yes. In terms of a conventional festival, er, sadly no. In the (sort of) words of James Murphy, “Poland I love you, but you’re bringing me down.”