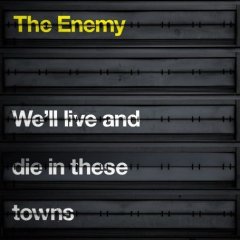 The Enemy – We’ll Live And Die In These Towns

Tom Clarke, Liam Watts and Andy Hopkins are The Enemy (TE) and are no strangers to favourable reviews. Stiff Records signed ‘em up. National magazines rave on about their exciting selves. Stars like Serge from tour buddies Kasabian big up their greatness and lunacy. So what is it that TE bring to Coventry’s rich heritage of musical output?

Born in March 2006 after a brief stint as ‘Bridges’, TE had released their LTD debut single ‘40 Days, 40 Nights’ by November, followed to date by 3 more singles and this LP. And when they’ve not been busy recording, they’ve occupied themselves by touring the country, gigging or holding in-store signing sessions, the next one being at HMV in their home town on Friday the 13th. Unlucky! Not the date, no! I lived in Coventry for a while. I worked in its HMV for a while. So… unlucky!

What about this 11 track LP that closes in 36 minutes then? The TE sound offers nothing original but does amalgamate some of the more magical moments smoothly. Treading waste grounds previously played upon by the likes of Arctic Monkeys, The Jam, Kasabian and even The Inspiral Carpets, kicking up remnant dust to create their own sandstorm. With upbeat songs that hardly fail to instigate toe tapping, foot stomping and in some cases, frenzied jumping up and down, I now appreciate the fervour filled reviews that these guys have attracted. Maturity is hinted at here and there before being vocally ousted from the songs focal point with loutishly delivered lyrics. LP highlights include a lyrically clever ‘Away from Here’, ‘Had Enough’, a current favourite of Jo Whiley’s and ‘This Song’, a great James / Joy Division crossover.

If this is their debut, their second LP should be awesome. Taking more time to craft the songs, working that hinted at maturity and building up each track from their ‘foot to the floor’ base level should produce something truly exceptional. But for now, just enjoy this romping album for what it is, a recording to rival any of those other fringe conscious bands riding the same ‘quirky lads with guitars’ ticket.