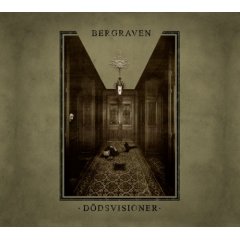 I am not, nor have I ever been a metal fan.

It is only for review purposes that I listen to this album of Swedish metal, twice. An album consisting of eight tracks, only one of which is under six minutes long and three other tracks are over the eight minute mark, combined with the fact that I haven’t got a clue what they are singing/screaming about or what the song titles mean makes this an extremely dense album to delve into.

The first track reveals a love of musical self-indulgence (would you expect anything less from a band with songs this long), starting from silence and slowly building up what could be a horror movie soundtrack, it is almost a minute before any noise at all is even audible without turning the volume up to a normally deafening volume. At two and a half minutes the heavy guitars kick into action (which will scare the hell out of you if you haven’t turned your volume down) and when any average pop song would be over the hoarse screaming vocals commonplace in metal finally launches an assault on your ears.

The following track is an altogether different affair, a sparse atmospheric piece, a delicate two minutes of minimal guitar and possible piano. And it is this quiet-loud-quiet formula that sets a precedent for the entire album.

Most of the epic length songs on this album incorporate the pattern laid out in the first two tracks, sparse sound that freefalls into chaotic guitar riffs, many of the tracks could indeed be two (it is true that most are the length of two), a cut and shunt song that has been welded together from two separate components. The ethereal and atmospheric combined with the heavy, unforgiving machismo metal.

The bizarre and repetitive final track gives the impression of a funeral procession as it leads the album away from our ears, neither loud nor quiet, it is sombre and mournful and plays over into silence, an almost nine minute march that trudges solemnly until it reaches its conclusion, ending the way it began, with silence.

For all my misgivings, this album is not as in-accessible as it first appears, it will never be an album I hold dear to my heart but the listening was an experience. A well constructed brooding piece that once you are focussed on the music, language is no longer a barrier you need to overcome.