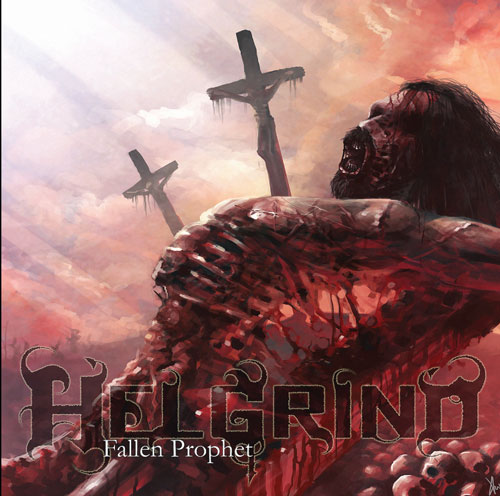 When a band creates something that exemplifies that particular genre or style it’s based in, that album or piece of music becomes a blueprint for which others often base their development on. When Metallica released ‘Master Of Puppets’ it became the standard bearer for what could be achieved in the thrash/metal community and subsequently a billon garage bands were formed.

If utilizing the two guitarist one lead, solo heavy thrashing guitar, straight off the street attitude were a debriefing of a criminal ‘job’ Helgrind would have the plans of Slayer’s ‘Reign in blood’ sprawled across room and be carefully picking out sections that were highly effective in achieving maximum carnage.

The only issue with adapting existing ideas, sounds and directions is that you have to bring something new to the proceedings otherwise you are fated to stay in the shadow of the previous artist. Helgrind do step away from the Slayer onslaught, if only to move closer to old Metallica (Pre ‘Puppet’s), and a synergy between the two could be achieved but it’s a chasm some heavy bands fall into.

That said, the quality of the playing is so ferocious that it’s difficult not to be beat down as ‘Insanity rules’ just slices through the mix and forcing you, hand grabbing the hair behind your head to headbang, if you want to or not.

Previous output from 2005’s ‘Denial’ album, most notably ‘Prophecy of destruction’ show a dichotomy of sounds available and Helgrind seem to sway between total aggression and more considered body shots.

Jim Hunts guitars could well be pivotal in the future as rather than the napalm assault messes King and Hanneman have: a whirl of bar abuse and speed picking-Hunt seems more considered. In a war he would be the black ops to King’s carpet bombing; and it’s here work could reveal a band that’s both continuing an established line and potentially creating a place for themselves with expectant release ‘Religious Persecution’.