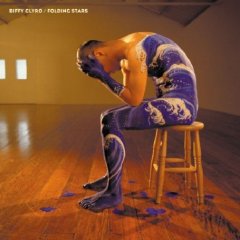 Biffy have been carving something of a hold recently with their album ‘Puzzle’ quite rightly being the album of choice to name drop, several singles later and ‘Folding Stars’ leaves the protective and comfortable surroundings of the album as a single.

In the age of quick fix and instant gratification a song has to be immediately arresting within only a few seconds, or suffer the mouse click or right thumb of destruction on the current listening device of choice.

‘Folding stars’ is missing that inventive spark that carries most of Clyro’s music and is omnipresent in any band bent on creating a unique sound. The drifting melody never really settles into Feeder territory, and never quite reaches the Foo fighter promises’ it makes.

Strong enough to turn your head but wouldn’t make you stop noticing the obvious build up coming in, on cue and without any real surprise

But listen again and there is an underlying pull to the chorus and the song becomes something you could easily find yourself walking past in a few years, yes you might not stop again that time either, but you will glance in its direction.