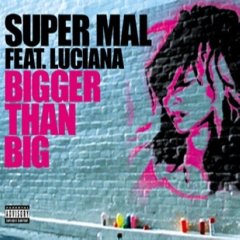 The ever-talented Luciana Caporaso has been around for quite some time and in a fair few guises. Yet, only she could manage to voice a whole generation in just over 3 minutes with another club hit anthem, ‘Bigger Than Big’.

This really should have some sort of written hot track warning on it because Luciana has done it again and hit music gold. Supermal’s ‘Bigger Than Big’ is already a massive club favourite and has made its way to the beaches of Ibiza and back. Officially, this is the second biggest track to feature Luciana’s unique ‘in yer face’ voice. The first being the notorious Bodyrox’s ‘Yeah Yeah’ which reached number 2 in the UK charts and was nominated for an Ivor Novello award.

‘Bigger Than Big’ has a definitive urban feel to it and I’m sure you’ll hear all those Londonite words (that basically mean cool) being used to describe what is essentially a really hot dance track. This is the clean version of the original demo that sounds exactly the same, except for a change of one word – wet.

When attitude matters more than ever, Luciana slams dunks loud and proud phrases like ‘how fabulous’, ‘vodka eyes’ and ‘ride it cowgirl buffalo style’ over a techno-driven Daft Punk sounding backing track. New-ravers beware! ‘Bigger Than Big’ is like a bottle of fizzy drink that’s been shaken, building and building until it borders on the edge of insane euphoric freedom.

Expect this to be bigger than big because it already is.