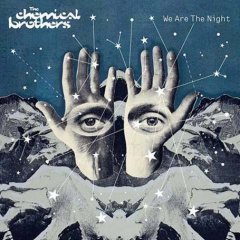 The Chemical Brothers – We Are The Night

Never having been the biggest fan of The Chemical Brothers (TCB), I struggle to pinpoint what it is that draws me to listen to their every new release. Is it simply the fact that they’re good at what they do? Is it the great guest appearances that feature on almost each of their releases? Is it the upbeat feel good vibe that they effortlessly dowse their tracks with? Whatever it is, I hope it’s included in this, their 6th studio LP. Featuring the likes of The Klaxons, Willy Mason, Fatlip, Ali Love, Midlake and possibly an unaccredited Damon Albarn on a couple of tracks, it’s sure to offer the above standard quality we’ve come to expect, right?

Hesitantly kicking off with the title track (after a short intro), a sure crowd pleaser at any festival, with its repetitive vocal and predictable structure, it plays through to its diversionless end, offering a good strong start to the LP. A sneaky Bjork sample on the Klaxons track ‘All Rights Reversed’ is used effectively, as is the colabatory vocal. Nothing epic or groundbreaking, but there’s time! A couple of misguided fillers that include the Ali Love aided single, bring us to the next mentionable track ‘Das Spiegel’. It’s quirky and unpredictable enough to engage us as it glides around the halfway mark of an LP that, as yet, has failed to stray from any previously played upon TCB playgrounds.

Now then, say hi to ex Pharcyde man Fatlip, a greatly overlooked cool cat freakster! Bringing flashbacks of De La Souls ‘3 Feet High and Rising’ LP and, largely owing to the title ‘The Salmon Dance’, reviving malignant memories of ‘The Humpty Dance’ by Digital Underground. Fatlips input here takes this track straight off the all too frequently travelled path that TCB know, serving up a refreshing midway song that could quite easily be mistaken for anyone but TCB. At last, something fresh and unexpected! A mysterious vocal chanting ‘Listen to your Heart’ is the only noteworthy element found between Fatlip and the great Willy Mason assisted ‘Battle Scars’, a song that fails to venture far from the successful formula that Wayne Coyne infused on ‘The Golden Path’, but still stands up in its own right. Penultimate track’ Harpoons’ is a bit of an Orb-esque meandering that takes us to the impressive closer ‘The Pills Wont Help You Now’. A New Order/Hidden Cameras amalgamation would produce something not too dissimilar to this quality last track. Overall, ‘We are the Night’ is the usual solid yet buoyant TCB fare, gaining momentum and pace in all the right places, with its infectious, otherworldly and constantly alluring set of songs.