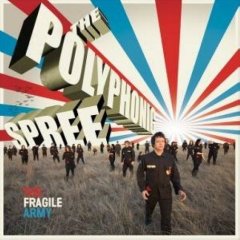 The Polyphonic Spree – The Fragile Army

The Fragile Army. A fitting title from a band that now swan around in military style jumpsuits, having jettisoned their previously donned, full length flowing robes. But it’s not the best title for a straight shooting LP that only occasionally touches upon the more fragile moments of its two glorious predecessors, choosing instead to abandon their open, sing-along chorus’ and repetitively chanted lyrics. The Kickass Army may have been more appropriate.

Here The Polyphonic Spree (TPS) are no longer following their dippy hippy directive. They’re on the move, ploughing through song after song and leaving no time for the sometimes thought provoking lyrics to stick in ones mind. They’ve still got their trademark TPS sound, though now, it’s enhanced and more dynamic. And weirdly, this could be the heart of their praiseworthy problem. There’s so much going on that it distracts the ear from any of the finely delivered vocals, superb percussion, epic brass work or any of the many other highlights found amidst the mayhem. The blend within each smothered song is sublime, but you really have to focus to hear it, contrasting vastly from their usual easygoing and accessible formula.

A practically non existent opening track bleeds into track 2,’Running Away’, which stirs echoes of ‘Tomorrow’ by ‘James’. The brass work seems vaguely familiar too, reminiscent of ‘James’ and their ‘Seven’ LP. And it doesn’t end there! Throughout the LP we find further influences from Beck, particularly in track 3, ‘Get up and Go’, the long lost twin of ‘Sexx Laws’, title track 4, a song that frequently revisits Beck’s ‘We Live Again’ and track 9, ‘Light to Follow’, fusing Beck’s ‘Cellphones Dead’ with a schmoove vocal that flashes back to Alison Goldfrapps contribution to Orbitals ‘Middle of Nowhere’ LP.

Besides all that, amazing moments of cacophonous psychedelia are abound. Freefalling piano solos spiralling out of earshot, seldom subdued moments that crash into harshly contrasting instances of riotous rock or stranger still, Robbie Williams-esque stadium rock outbursts swimming in choral whistling, making it more ‘Dads Army’ than Fragile Army!
This is a strong LP that will please the faithful, but given its mainly impenetrable wall of sound, I can’t help but feel that this will spend less time on the stereo than either of its ancestral peers ever did. In comparison, it’s hard work on the ear!