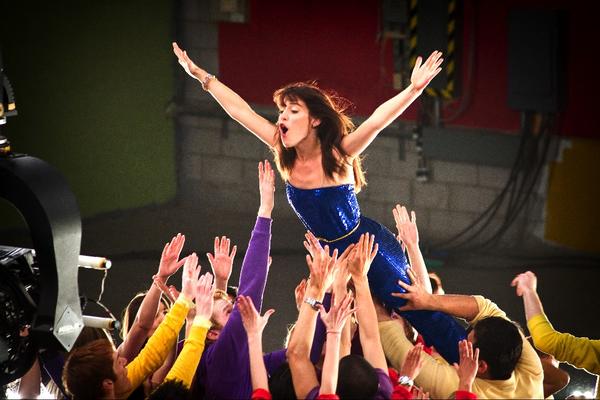 Of all the debate surrounding the merits and practicability of the recent smoking ban in public places, not one ounce of thought or consideration has been given to the needs of the earthy, bluesy/anti-folk purveyors whose life-weary tales thrive upon a dingy and smoke laden environment. That said, London’s Noah And The Whale still manages to come across with rugged abandon, as minus their drummer, the makeshift and it seems, often improvised percussion adds to the authenticity of the down-to-earth simplicity that is coated by a masterful vocal touch. ‘Jocasta’ strikes a chord for its journeying nature and simplistic approach that bears out heart and life, incorporating a Brer Brian vocal touch. A dual violin cushion helps the thoughtful ‘Mary’ create a winding feel, lending some boldness to the acoustic grounding that has been well laid. Noah And The Whale use a winding Four Tet veined instrumental approach to bring out intrigued looks on the faces of gatherers, who seem to make a mental note of the band’s name for myspace purposes upon their return home.

The Calgary born Leslie Feist splits her time between ranging soloing and even broader atmospheric foraging with Broken Social Scene. The French/Canadian is known for choosing her set openers like a bride would select her wedding ring. This evening, some sharp cooing gives members of the crowd who are drawn from a broad demographic, an insight into this authentic artist’s vocal preparation and her voice needs to be at its sharpest to match the rugged rock n’ roll licks of ‘Honey Honey’, from latest album The Reminder’. As expected the night is going to be one of range flitting, ‘When I Was A Young Girl’ takes the grit of Joan As A Police Woman and sprinkles in a pinch of the Tori Amos narrative command, highlighting how different the tracks from 2004’s ‘Let It Die’ album are delivered in a live setting. Songs from the current album retain their rugged, roving streak and with the financial backing of the good people of Polydor, a talented backing band flits from keys to horns, to guitars, whilst a steady percussion push helps the beats stay firm. This is a far cry from the stripped down solo sets that have been produced on past visits to the UK.

Some longing soul in the form of ‘So Sorry’, shows that Feist’s vocals are clearly appreciating the smoke-free environment. Every gig needs a catchy and thoughtful pop moment, doesn’t it? Previous single, ‘My Moon My Man’ provides this with carefree abandon that filters into the crowd in the form of pleasant singing or miming to the mystical lyrics that are delivered with catchy sureness. The troublesome side to this captivating artist is drawn out through ‘Brandy Alexander’ that has a hint of Jenny Lewis in the form of a weary country tinge. The usually skipping big-hitter of ‘Mushaboom’, is given a booming bass touch and a horn push that fattens it up and brings out more of the sadness that attaches to this homesick tale. Sorrowful ode and new single ‘1234’, keeps the intrigue and range growing throughout this 75 minute foray into the mindset of one of life’s pondering people. Feist has a voice that you just have to listen to and, one mischief maker learnt that to his cost when sternly admonished for trying to tape the entirety of this bracing set.