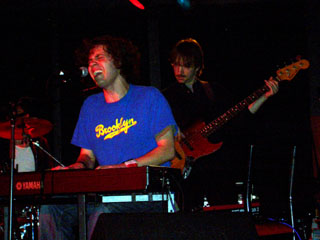 Music tours make for strange bedfellows and so it is that svelte New York crooner Julian Velard finds himself at a party organised by electronica label GrecoRoman, before an audience braying for the laptop toomfoolery of David Sugar and the turntable antics of ’90s jungle pioneers the Ragga Twins.

Equipped only with a piano and a voice so oily it could lubricate machinery, Velard belts out a set of polished pop balladry glistening with radio-friendly appeal. Think Mika without the squeakiness, Luke Toms minus the whimsy.

Or perhaps a better comparison would be Elton John with just a smidgen of Ben Folds. Velard’s songs gesture towards offbeat quirkiness but in truth they’re unabashedly geared to the mainstream, with the sort of mannered smarm that could easily find a home on Michael Parkinson’s Sunday afternoon playlist.

The standout track tonight is ‘I Gotta Do It Alone’, a prankish but bittersweet paean to post-relationship singledom that features the snigger-inducing couplet “It’s not because I miss you / That I’ve bought this box of tissues.” The rest is mellifluously retro piano-pop that’s pleasurable without being especially memorable.