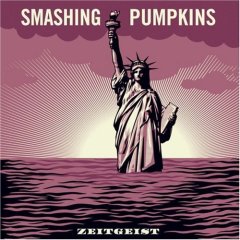 Seldom do you hear of bands reforming without a little grimace sneaking across your face and replacing that initial impulsive grin. It’s the fear of what they might be up to, what they might sound like or how much they can swipe out of your wallet to keep your collection complete, after all these years. I know I’m gonna string myself up if ‘Happy Mondays’ get back together again. DOH!

The Smashing Pumpkins getting back together after an all too brief stint as Zwan, summons nothing but good vibes. The fact that the only 2 original members of SP are the very same who went on to create Zwan, thus technically making this a Zwan reformation, serves only to repress those good vibes. What kills the vibes dead, you might ask? Well, it all boils down to the money spinning music machine. Zwan died a premature death, brought on from random fans at gigs asking for their money back ‘cause they wanted to ROCK! And I don’t think Billy Corgan has forgotten that lesson. It don’t matter what you play or how well you play it. You’ve got to give the audience what they want or split up.

We’re not all Radiohead who after releasing OK Computer, just got into making entirely different music, without so much a name change, for their faithful fans to snap up off the shelves before disillusion bit ‘em in the ass. SP are back for what I’m sure will be a 1 LP and associated singles, money raking, merchandise making exercise. And so, if you’re gonna do it, do it right. That’s what any half decent unit shifting suit will advise. Surely Corgan wouldn’t listen to that noise, would he? Hold tight fans. You’ve had Tarantula charting as a single and Doomsday Clock charting due to digital sales. Now, after you’ve bought the various promos, you can buy Zeitgeist on, 9 different versions. (Regular / Deluxe / iTunes / Oz iTunes / Target / Jap / HMV / German special / German Amazon). None of those include any bonus DVDs, which I’m certain, will surface when sales start to drop. Enough of this nonsense! Just tell us if the music is any good, you goddamn crazy fool!

Kicking in with a safe and non experimental SP sound, Zeitgeist draws the listener in and demands to be heard. Moving swiftly onto similar ground with the odd freaky reprise thrown in, the signs are all there and they’re all good. Approaching halfway and we find a timid That’s The Way (my love is), which could’ve been taken straight from Zwan’s LP Mary, Star of the Sea. Followed by a mediocre Tarantula that clings too closely to our preconceived SP notions and fails to satisfy our inner craving for originality.

Penultimate track ‘For God and Country’ strays from the well constructed but sometimes overbearing SP drone, preparing us for the accessible closer ‘Pomp and Circumstances’. Zeitgeist closes with this facile track, guilefully neglecting to truly reflect the resolute contents within. The SP are back with an LP that will satisfactorily serve up some respite from listening to their back catalogue. Well done to Billy and his latest minions.