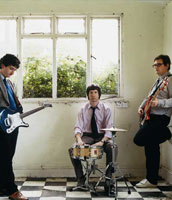 The Young Knives – Are Dead…And Some

In a frank interview with Michael Parkinson, David Bowie once put the secret of his success and his music down to finding the musical notes that are slightly off key, off kilter and which deviate from the norm.

It sounds like The Young Knives have taken this idea to heart. ‘The Young Knives…Are Dead and Some’ is a lengthy illustration of discordant sounds thrown together with their creators standing back and hoping for the best (presumably with safety goggles on).

It’s the Post-Punk version of the Big Bang Theory. And let’s face it they look more like Particle Physicists than a successful punk outfit.

Admittedly there’s no middle ground with The Young Knives; you either love them or hate them.

The opening track is ‘Walking on the Autobahn’, and aside from reinforcing the European ideal, this kind of behaviour can only lead to a rather messy end, which the Young knives’ detractors have possibly been praying for.

Glam Rock has been resurrected and forgotten in the shape of The Darkness, and this smacks of the punk alternative.

You’re left with no doubt after ‘English Rose’ that the band means what it’s singing about, but the rest of the album is bit of a riddle.

The Young Knives have essentially put themselves up as a novelty band with their weird PR approach and performances. The only problem with that is novelty’s a singular thing: It generally doesn’t warrant a second throw of the dice.

Fans of The Young Knives will undoubtedly love this album, but this reviewer thinks they’re taking the piss now.