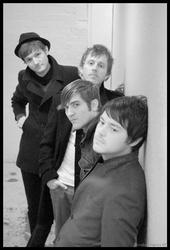 Circuits – Young Enough Not To Care

Circuits are a tight and competent British four piece with their first single, Young Enough Not To Care providing solid evidence. This single is spiky, stimulating and instantly alluring. The audacious vocals penetrate with an infectious quality from Benny the lead singer with sharp and captivating lyrics. The almost ska-like bass line is pulsating, the backing vocals fade in and out cleverly, and there are occasional sparks of interesting guitar segments. Despite this, the track is let down by a lack of overall guitar ingenuity and poor production on the drumming.

On the whole Circuits cannot be considered a unique British act, but the single does help display the band’s fairly distinct sound using a blend of many music styles and influences, which illustrates their potential future promise. Young Enough Not To Care may be strong enough to help Circuits breakthrough, it’s just a shame that the superior b-side, Little Victories wasn’t released instead.