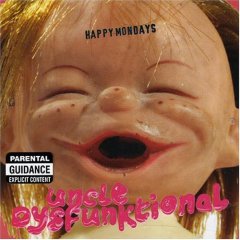 We all reach a point in our lives when we can no longer forgive the sins of the misguided or needy. Whether that inability stays with us or not is something that only a personal, time served conquest will reveal. And if it does stick, HEY! There’s always Jesus!
Now, whether he can bring himself to forgive the Happy Mondays (HM) of all their vice fuelled crimes is down to JC and his philanthropy! Excluding the drugs and concealed violence, the tax evasion and blatant extortion and any number of other unreported crimes that I’m sure Shaun Ryder (SR) and his band of messed up men have gleefully committed, it’s the crimes that they’ve got off with that I struggle to come to terms with.

HM started out by alienating almost everyone outside of Manchester by singing their bizarre slang throughout their debut. I got hooked after hearing it, their first, best album ‘Squirrel & G Man’, 3 years before anyone with a pulse got affected, in some way, by their more commercial but all important ‘Pills, Thrills ‘n’ Bellyaches’ LP. And throughout their ongoing, decade doubling career, they’ve given us about 14 LPs, 20 singles, music loving tour after tax man appeasing tour, re-release after re-release, reformation after reformation and most notably, they championed Madchester and all associated with the scene! Can I justify the money spent keeping HM in a comfortable lifestyle? I could, until I stopped buying into their ever degenerating value when they released ‘Yes Please’ in 1992. After scooping up everything I could find like a good little minion, the magic was lost. Their performance of ‘Stinkin’ Thinkin’ on Top of the Pops’ did nothing to change my, by then somewhat bent mind! Nothing like SR though! PHEW! ‘Pills ‘n’ Thrills’ was their last, truly credit worthy studio album. And that was, wait for it, 17 years ago. So now, once again, the baggy HM transformer has transformed into… another ugly duckling, with what will hopefully be their final, new fangled, crowd drawing being. Uncle Dysfunktional, what have you got to say for yourself?

Well Ant, it’s like this, he replies in that incredible, inaudible drawl of his.
My HM sound hasn’t changed much. Blending attitude amongst the country guitar, dance anthem keyboards, bass driven drums and new samples works real well. There’s still a fluctuating but definite mad manc energy going on. Although most of that, including the car alarm sampling and cockadoodledoing, sounds like it’s just there to fill the space around the short but nifty riffs. Things that are usually out-takes from around the studio have been fully utilised and included on the LP. Venturing into some aimless songs that run out of tempo and even slide offbeat is a new dimension too! Whatcha gonna do?! There are some great moments too though! A favourite moment is at the end of ‘Rats with Wings’. It slumps into a ‘break it down’ moment laid over a nice blues sample.

As for SR, he can still muster up just enough energy to pronounce anything half assedly! Most of it serves only as a reminder of what he used to be capable of, you know, his old sharp wit and illustrative storytelling. Nowadays, he’s more about gimmick filled shock value. Any hints toward that genius of old, falls flat on its back. Subject matter now includes things like pressing his tits against the floor (now he’s become a lady), throwing gobstoppers at your bedroom window, ladies pissing in pots and hell, even the weather isn’t safe from his sinister speculation! It’s too hot for Speedos! Oh, I regret his ‘Andy Warhol, on the dancefloor, Anti Warhole, on the Dancefloor’ lyrics a little. If he’d spent a bit more time on that and committed himself, perhaps he could’ve made a real clever little chorus. Couldn’t be bothered though! He even makes words up now to keep in time with the music! Oooh ooh ooh! I think he sang ‘snim flam’ at one point and randomly repeating any uninspiring lyrics he’s already used works too! Occasionally snarling and shouting gives a harder and improved edge to his voice, especially on track ‘Deviants’. If you’re looking for stability in the vocals, check out the backing tracks for tracks ‘Rush Rush’, ‘Cuntry Disco’ and ‘Dr Dick’. There are some solid sampled vocals too.

As for influences, you can find ‘Pale Blue Eyes’ by The Velvet Underground, ‘Gangsta’s Paradise’ by Coolio, some Charlatans organ work and some Tricky style rhymin’ from Mickey Avalon. There’s even one track where they sound so close to our 1992 originals that we might as well have sampled our own ‘Cut ‘em Loose Bruce’ drums and backing vocals. Cunning hey?! Throughout, Dysfunktional Uncle stumbles upon some energised and well structured songs. It’s just the essence of the songs, the quality, the appeal and ultimately the importance of the songs that disappoints. Its fun for the right people, but any HM fans will feel the impact of this like its full payback for the 24 hour partying of yesteryear.

You can watch a live video for Jellybean here: