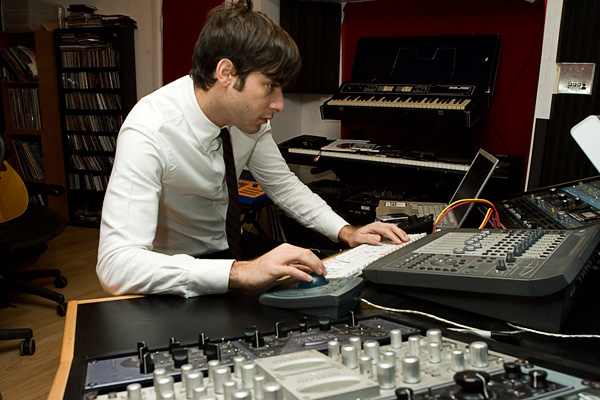 Well, that man Ronson’s back! The bloke who seems to have more God given musical talent in just his left leg than the opening night of the Proms. When he finds a spare minute away from being asked “what was it like dj-ing at Tom Cruise’s wedding?”, he has taken to becoming the saviour of many a run of the mill pop careerist. He infused the funk into the house of wine and made Coldplay a lot colder. Now it’s the turn of everyone’s second favourite posh little chavette (second favourite? Yes, second, everyone with any taste knows Kate Nash is better – but let’s debate that another day) Lily Allen. Oh and, indirectly of course, the Kaiser Chiefs.

This is the Leeds indie munchkins gig-ending anthem like you never thought you’d hear it. Smooth and groove covered, those trademark Ronson saxophones and one phat, phat beat! Lily’s cheeky cockney inflection gives it a new character, and the soul of the tune brings out a much more talented vocal performance than any of her own songs require, and therefore to be honest, I didn’t previously think she had in her – so hats off Allen! Keep it up and the sceptics may yet like your work nearly half as much as your dad’s!

It’s the seemingly endless remixes that are floating around the various versions of the release that give the track a life of it’s own. There’s a deep house mix by Chris Lake, which is stunning. And various delicious, grimy dub mixes galore. However, it’s when Marky boy flexes that bible-sized little black book of his to rope in an a-lister it really takes you by surprise. He’s only gone and got legendary motor mouth MC master Busta Rhymes in for a remix! Although, it has to be said, his fairly under used contribution sounds very much like it was stuck on in post production having been e-mailed over at the last minute. But, none the less, Busta Bus is always going to add that extra bar of cool to the proceedings and he doesn’t fail here.

Ronson really does have the midas touch right now, waving his musical magic wand (no comments please!) like the hip-hop Trinny and Susanna for an off the peg, street-cred rating, botox injection.

So any rather uncool pop stars out there in need of a groove boost makeover and instant credibility transformation – you know the man to call! Who’s next you wonder, James Blunt? Well, if anyone can, Ronson can!