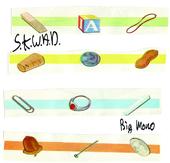 With more hooks than a fishing trawler, Pontypridd’s sons S.K.W.A.D have come up with a potential soundtrack to our non-existent summer.

Coming across as Therapy without the trauma with harmonies abound it’s easy to link them to the ‘Lost prophets’ but were not going to, instead S.K.W.A.D knowingly play the pop/punk card and are happy that the songs bounce along merely severing the purpose of being enjoyable.

‘Fire In the sky’ swerves and weaves, while ‘Pressure’ topped with Campbell’s voice is both new and understated-it’s like Morrissey cheered the fuck up, dyed his hair blond and joined a punk rock band. The Wild hearts abandon of ‘Shit happens’ and it’s refrain of “Shit happens, why can’t shit happen to me?!” is as carefree as it’s sincere; and the sheer exuberance of the playing on ‘What do you want?” and it’s explosion-in-a-bullet factory playing of Dave Campbell’s drums make ‘Big mono’ a fresh slab of pop/punk/rock/call it whatever you want songs, enjoyable for the few minutes of sunshine our summer has to offer.