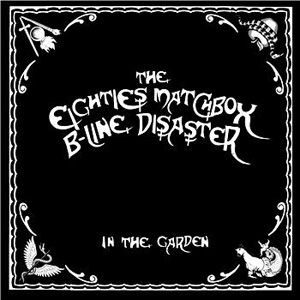 ‘In The Garden’ is the biblical punk downfall of Adam and Eve told through the eyes of the dark McKnight. This is Eden in a distorted parody of sin, the tale of man’s first tragedy, giving in to temptation.

Another tragedy, albeit on a lesser scale, is the length of this new record. An EP it may be but we have waited for what seems like centuries for the follow up to The Royal Society. So ten minutes and ten seconds for three years wait, is cause enough for fans to banish these guys back to the studio until they produce a full length (thirty minute) album…Until then we’ll have to keep going to the shows to see all the classics live.

It was as if Eighties Matchbox intentionally quit after their second album and patiently waited for the crazy phase of media spotlight to pass them by, before slowly emerging slithering out into the sun again. Only now 100% officially underground, cult followers only. Forget the big heads of Mister Mental, Eighties Matchbox pasty white skin is staying in the dark until the stage lights come on. You wouldn’t think they were from Brighton. This is gothic Elvis punk rock back to its best. A shame there’s only ten minutes of it but it’s just good to know that they still exist.