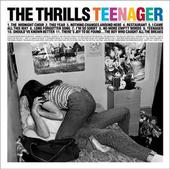 The Thrills – Nothing Changes Around Here

Well well, looks who’s back! After a few years of edging ever closer to “what ever happened to them” territory. Irish soft rockers The Thrills return with the first single from the forthcoming third studio album ‘Teenagers’.

After being a band that seemed to be everywhere, especially after the acclaimed debut ‘So Much for the City’ in 2003, and still to an extent with the following years ‘Let’s Bottle Bohemia’, their subsequent disappearance was quite surprising.

Nothing dramatic has changed in The Thrills formula with this song. However, you do get a sense the time away has been used to reflect and work on their songwriting and sound in order to put out a well-polished and slowly matured piece of work (it turns out they haven’t just been sunning themselves on a Caribbean beach or stacking shelves in Tesco for three years!)

It’s safe to say that ‘Nothing Changes Around Here’ is easily one of their most accomplished, accessible and memorable songs to date. Diarising a feeling we can all relate to. Those inevitable times in life when good things come to an end, sometimes sourly. People change as do circumstances and, weather we like it or not, you just have to get on with it. “Well if you’re looking for famous last words, so long! Just don’t tell me that you loved me all along.”

Their sound has not changed much either over the years. Still run by Conor Deasy’s trademark, nearly losing his voice throaty tones. Gentle acoustic guitar and here with some Keane piano and a helping of Travis banjo plucking. Much as they always were for the most part but then, if it ain’t broke, why fix it?

This is a very impressive if not slightly unexpected return, and from the sound of the rest of ‘Teenagers’, that hiatus could prove to be a very shrood move indeed, and see them climb right back to the heady heights they previously enjoyed and, who knows, maybe even higher? Welcome back fellas!