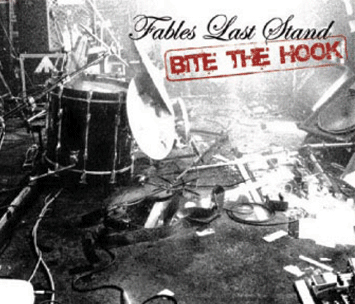 Looking every bit like rock stars with their long hair, skimpy vests, shady shades and seemingly obligatory tattoos, Newcastle’s Fables Last Stand(FLS) are undoubtedly living the lifestyles of their heroes, namely AC/DC, Guns ’n’ Roses, Motley Crue and all that crowd. Their myspace site is menacingly decorated with barbed wire wearing tambourines and amusingly, claims of ‘sleazy music to f**k to’. FLS are your stereotypical rock band.

‘Bite the Hook’ is their debut single and though I hate to do it, I’ve been given no choice but to slag it off! Regurgitated riffs and low-grade lyrics that clumsily conflict within a self stifling structure is what they’re offering. The musicianship is there, but with such little chemistry between the players, it’s just not praiseworthy. Nothing original is thrown into the mix and every part of the song has been done before. Even the contrived lyrics are predictable, clichéd and ultimately laughable. Hell, even their guitarist goes by the name of Twiggy!

What you can buy from them including badges, t-shirts and of course CDs reflects their love for their fans. And this may be their only redeeming quality. They’re unashamedly making instantly accessible, toe tapping rock outs for the common man, something I can’t discredit. They’re just doing it so poorly that I doubt I’d even wear a free badge. One element of the rock ‘n’roll lifestyle I failed to mention was the drugs and I’m not saying that they (ab)use them in any way, but if they are, they need to stop it and get their act together! Nothing personal you understand and I hate negative reviews for debut releases but what’s a guy to do?