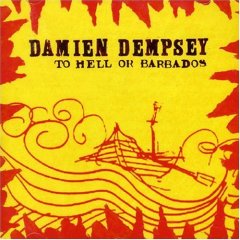 Damien Dempsey – To Hell or Barbados

When the music begins on Damien Dempsey’s ‘Hell or Barbados’, you will almost instantly feel punch drunk by its unusual charm and power. In the first track on the album, ‘Maasai’, Damien improbably finds a spot somewhere between India and Ireland to pitch his vocals. And these vocals genuinely make the spine tingle. The superb singing is twinned with a dark and driving rock groove and embellished with deep, inquisitive bass lines and trance-like acoustic guitars that unite to create a sound akin to Doves at their best. It’s a sensational piece of music.

The rest of the album doesn’t so much tail off as shed its load prematurely with all the heavy intensity of the first track dispersing before it’s been properly explored.

There are still several other very palatable songs, not least How Strange, which touches all too fleetingly on the dark magic of the first track but still holds it’s own with a vocal reminiscent of Morten Harket in his post-hay day. And in ‘Serious’, we get a true representation of the broad Irish accent of the singer during a piece of spoken word in the style of a sober Pogue, which is lyrically engaging and delivered with a rebellious sting.

Different musical influences abound in the second half as Dempsey’s obvious love for Reggae music is consummated. It’s a bold attempt to make an album which lends from most corners of world music, but this strength is also a weakness and some of the music, in particular the reggae, flirts with mediocrity.

In short, the best of To Hell Or Barbados is brilliant but the worst is slightly annoying.