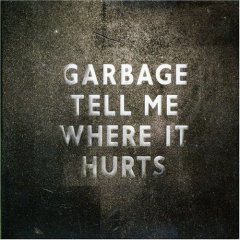 Garbage – Tell Me Where It Hurts

Tell Me Where it Hurts marks a brand new single release from those nineties heroes Garbage. The single is to be featured on Garbage’s Greatest Hits album, “Absolute Garbage”, featuring all the classics we know and love, (Stupid Girl, Crush, Push it .)

Tell Me Where It Hurts itself is a some what a safe release from Garbage, the track is heavily produced and very chart friendly. Listening to the track, it could be easily mistaken for a “Beautiful South” Ballad.

Tell Me Where It Hurts lacks the rawness, that was so evident in those mid nineties releases such as Stupid Girl and Crush. Shirley Manson’s vocals are soft and melodic; however the track itself lacks spirit, and comes across as being very bland and unadventurous.

The greatest hit collection “Absolute Garbage”, will sell well due to Garbages previous successes, however the release “Tell Me Where it Hurts”, is a far cry away from that that iconic group who first burst into the charts in 1995.