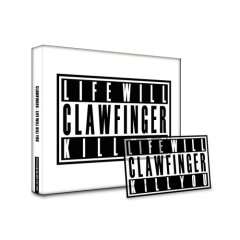 Clawfinger – Life Will Kill You

We remember first’s in genres-the initial explorers in the said field, experimenting with styles and challenging expectations-and as well we might for without this invention music, anything in fact becomes stagnant.

But what of the pioneers who run through that open door created, that perfect musical styles and then continue to challenge and bring something interesting to the table?

Clawfinger were there from the virtual inception, mixing metal, industrial and rap together as only a group of Swede’s could. Their first release ‘Deaf, dumb blind’ is still as fresh as it was in 93 and just as controversial- six albums on and the question is ‘Is the new album as good”- but it’s the wrong question.

The real question is “Is it any good?” and the answer is yes, it’s fucking great. Y’see it’s comparable to previous material because of the machines that made it, but remember, most ears that hopefully will hear this have possibly never heard of this band so it’s immaterial if it sounds better worse or anything like previous work.

That said fans that have stayed with Clawfinger throughout their career shouldn’t see it as a return to form, because frankly they never lost it, more as a fighter who’s gone away and studied the best way to assault his opponent it just so happens that opponent is your head.

The sheer industrial weight of ‘Life will kill you’ & ‘The price we pay’ encapsulates the popular themes Clawfinger tackle; the struggle of life and an intelligent look at how to deal with it.

Clawfinger address subjects that are familiar with metal and heavy music with a cerebral and alternative perspective. Whereas Slayer may have wrote ‘Jihad’ with the intention of shock, Clawfinger have tackled suicide bombing with ‘Final Stand’ switching the perspectives again and leaving you altogether more traumatised.
You really have to ask when was the last time a band covered such topics as ‘Little baby’, detailing child abuse in a manner that’s made to shock and revile you away from the speaker.

‘Prisoners’ and ‘None the wiser’ with it’s -Dave Mustaine clashing with Dino Cazares style riff – are the strongest pieces here and their lineage with the likes of Pitchshifter and Fear factory is cemented.
Some may see ‘Where do we go from here?’ as something of a prophecy for telling of a lack of ideas, but this is untrue-Clawfinger simply need to continue, to exist, to challenge.

Life Will Kill You is pissed off, but in the way that it’s jabbing at the side of its head with one finger -sometimes until it bleeds- urging you to think.