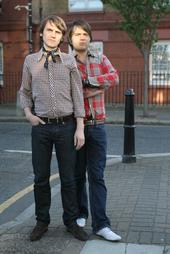 The Tacticians – Some Kind Of Urban Fulfilment

I hoped to avoid it, but sort of knew the day would come when I would have to review a band that sound like a poor version of The Feeling. ‘The Horror!’, as Marlon Brando would say, or ‘s’il vous plait non!’ as a random Frenchman might mutter if he heard them whilst on a three day business trip to London, arriving on the Thursday and returning Saturday Teatime.

It’s hard to imagine what possessed this band to make an album. It really is dire. If you can picture Crowded House and Badly Drawn Boy somehow conceiving an emotionally challenged child that wants to write annoying Supergrass songs you are starting to get the plot. It’s a horrible milkshake of music that has all the wrong ingredients and even if no other music at all had been made in this decade, The Tacticians would still be referred to in future as ‘one of the poorer bands of the era.’

I don’t really have a problem with the aforementioned acts (except The Feeling, for whom I have a deep dislike, bordering on the irrational, and Crowded House who must be annoying even themselves by now), but The Tacticians are surely dangerous on the ear and if invited, I would definitely consider going on a march to stop this music being aired.

It’s just such a contrived attempt to get into the slipstream of any and every style that might be topical enough to make them successful. There is no soul or agility to this music and you feel that you have heard everything each tune has to offer within a few bars. I’d guess that this is a case of the band coming up with a guitar hook and then just ‘adding bits’ until about 4 minutes has elapsed, on the basis that the initial hook is strong enough to carry each saccharin saturated song.

It’s hard to understand the style of The Tacticians because it’s such a badly chosen mish mash of mid-nineties Brit Pop B-sides and Greg Alexander inspired nonsense with endings that remind you of the outro music in The Perishers.

On the plus side, it’s still terrible.