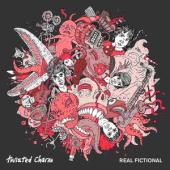 Following their earlier 2005/6 EPs, ‘London Scene’ & ‘Boring Lifestyles’, August 6th sees the release of TCs, Lance Thomas produced, debut 12 track LP, ‘Real Fictional’. From the outset, its clear that Finsbury Park based Nathan Doom (vox / guitar / synth), Luke Georgiou (saxophone), John Garley (bass) and Dominic Cole (drums) are not only capable of composing songs that fuse all of their diverse sources of influence together; it’s obvious that they’re good at it and enjoy making the feversome, manic music they do.

Fleeting glances of songs like Monster Mash, Cool for Cats and even the Batman theme are commonplace and utilised superbly. BUT, with so much going on in their sound, it’s easy to feel a little overwhelmed or bombarded by the full on delivery of each track. Coming at you thick and fast, it leaves you very little time to bask in the glow of any of the many highlights that can be found here, my favourite being ‘Cinema’, a subliminally catchy track that follows you around like next doors cat, half an hour before feeding time. It won’t go away. It will follow you wherever you go. And, trying to kick it would certainly be frowned upon! I feel sure that given half a chance, any track on this LP could take the same hold on you and your subconscious, but as ‘Cinema’ was released as a single on July 23rd, why not go and check it out as a taster?! B-sides include live favourite ‘Whore’ and a South Central remix of ‘Boring Lifestyles’.

There are a few albums that are better listened to with a ten minute breather between each song, so as to allow the proper appreciation they long to inspire to flourish. Real Fictional is certainly one of them. Unrelenting as it barrages your brain, each track of this LP demands that your ears keep on their toes! And just like those very ears, the tracks stand up tall and proud and challenge the competition to come and do better. TC have cleverly crafted their sound and injected each track they write with the necessary fervour to fulfill the infectious effect that they’re fighting for. A little more time spent on the LP and the shaping of it as a whole, as opposed to gathering up all the tracks, lining ‘em up and knocking ‘em out, would’ve been time well spent. Like time spent listening to or watching TC live at any of the upcoming shows listed below!