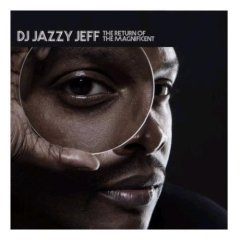 Jazzy Jeff – The Return of the Magnificent

Too many great duos seem to part company for a chance to prove themselves in their own right. Bloody ego hey! Gone are the days of Fry and Laurie, Cheech & Chong and sadly Jazzy Jeff and the Fresh Prince. Man they were all that, back in the day! Now, Will Smith wants to be the first black president in the Whitehouse and Jeff; well he’s still thankfully grounded in reality, keeping it real!

His ‘Return of the Magnificent EP’ features original, clean and instrumental versions of ‘Jeff ‘n’ Fees’ (featuring Rhymefest), ‘My Soul Aint for Sale’(featuring Raheem DeVaughn) and ‘All I Know’ (featuring CL Smooth), all taken from the identically titled LP. This EP also contains 2 exclusive tracks, ‘Whatever U Want’ (featuring Little Brother) and ‘Bossynova’. The question is has Jeff suffered any arthritic ailments since then?

Jeff’s still got the magic of yesteryear flowing through him! ‘Jeff ‘n’ Fees’ has a nice sharp hook that’s built up with catchy samples and familiar popping, snapping beats, setting the stage for him to do his sleek as ever stuff on the decks. And he does it every bit as well as heavyweight maestros of the trade like Mixmaster Mike, Cut Chemist or DJ Qbert to name but a few. Rhymefest rides the grooves fluently enough, bringing the necessary urgency and relevance for today’s market to the mix. I must admit though, it’s not a market I can buy into like I could when ‘He’s the DJ, I’m the Rapper’ hit the shops.

As for the flipsides, they hit upon more soul tinged sounds that take us back to soppy, regrettable ‘Big Daddy Kane’ tracks, even echoes of ‘No Diggity’ can be found. When RUN DMC fans bought their ‘Crown Royal’ LP, they cringed as they prayed that an LP with so many featured artists could actually justify its release. I think that LP passed the test and given that Jeff is merely a DJ, we can forgive his understandable but somewhat misguided collaborations. That aside, ‘Bossynova’ closes the EP and brings a refreshing and easy going end to the proceedings with its surprisingly bossa nova fuelled sound that wouldn’t be too out of place on a ‘Bewitched’ soundtrack. A strong EP that entices you enough to go and buy the LP which I’m sure will be filled with stunning scratch work and hopefully, a more diverse array of collaborators to break away from the dominant soulful edge found here.