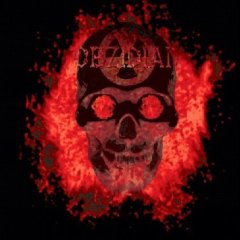 It’s not to big a stretch to imagine some of the songs on Obzidian’s self titled album to have skulked and found their way onto Black Sabbath’s ‘Vol 4’ or ‘Sabbath bloody Sabbath’ albums, had Sabbath not took even more coke than they did, they didn’t-possibly because there was none left-so instead we can enjoy Obzidians metal with these six songs and two live recordings.

Whilst it’s fair to say Obizdian have their slower moments, indeed ‘War machine’ has the sprit it of Iommi slow riffing all around it and ‘Dead blood’s dripping slow growl has the determination of a marching army-they are not afraid of the thrash aspect of there peers and ‘Progression’ moves at a pace and style similar to Metallica’s ‘Blackened’.

With his Rob Flynn devouring Howard Jones vocals Barry Foster compliments the devastation well and with the blueprint-in a good way-metal of ‘Wisdom of few’ Obzidian have created an altogether tight, black and tough as nails package.

It’s not without fault, during the vocal scream in ‘Blind faith’ the drums needlessly fill in and would have more effect staying silent and then blasting in. The guitar sounds weak when soloing, the playing quality is high but it drops In the mix and where it should elevate the song it seems flat-potentially it could have been Di’d and lost some of the atmosphere-and it is this area that Obzidian would be addressing next.

Putting live songs on releases can either be a touch of genius or a complete mistake-as the listener gets to hear the band in their most naked form. If the band are not tight it will show if they’ve overdubbed to hell, again it will come out. Fortunately the two live tracks ‘Relentless’ & ‘Epitomy of evil’ both boiled in Black label and Zakk Wylde’s pocket playing are excellent. It completes a deal made with the listener-effectively saying “We will be good live.”

Rather than an outright onslaught Obzidian have a more deliberate stance, a constant march, a crusade like forward motion-they reckon this is there best work yet-as well they might-and it’s completely true; the excitement comes from hearing what they could possibly come up with next.