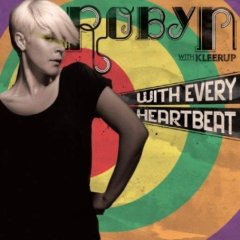 Robyn – With Every Heartbeat

Robyn is the Swedish founder and CEO of her self promoting label and latest Island joint venture, Konichiwa Records. Whilst you might not be too familiar with Kleerup, you may’ve encountered Robyn at some point in her decade long career, which seems it just might be hitting its peak. With her latest release being record of the week for Jo Whiley and Scott Mills, getting ‘A’ listed for Radio One and hitting the iTunes charts at number 6, it surely won’t be long before you hear this track, if you haven’t already!

‘With Every Heartbeat’ is out July 30th (download) and August 6th (discs). Released on enhanced maxi CD, 12” and limited edition 7”, it features the LP version as well as mixes from Tong & Spoon, Steve Angelo, Punks Jump up, Hugg & Pepp, Kenson and Kleerup, across all three formats. There’s also the video to what I feel was Robyn’s finest moment, her signature song ‘Konichiwa Bitches’.

Whilst the remixes by the aforementioned folk bring alternate dynamics to this song, bigging up the dance ethic here and holding back the sentiment soaked lyrics there, there’s really not much diversity between any of them. A heavier beat, a phased vocal yadayadayada! No disrespect you understand, just maybe a little predictable! So, as for the original, well it’s a string driven tale of woe and sorrow, enhanced by Kleerup’s euphoric dancefloor pop sounds. What more could you want? This single has, deservedly or otherwise, drawn comparisons to the likes of Kate Bush, Britney Spears, Daft Punk, Madonna, Janet Jackson, Timbaland… you get the idea. It just doesn’t sound different to anything else that has come before it, but hey, does anything these days! Yes it’s taken from what NME called the most inventive pop album of the year and maybe they’ve got a point. If only Robyn could stick with her defiant and somewhat deviant persona, she might get recognised in her own right as a new force in the music industry. Oh wait, she is!

It’s all good and well to show off your diversity and knock out the odd ballad, but when you’re so damn good at going off on one and telling it like it is, it seems tragic to stray from what I feel is an attitude capable of going toe to toe with the likes of Roxanne Shante or even Peaches (that I’d like to see). All in all, Robyn’s got it going on!
Check her out on JoWhiley’s Radio One session, August 8th, or see her live in September.
She’s playing on the 7th at London’s Bush Hall and on the 8th at Bestival (Isle of Wight).