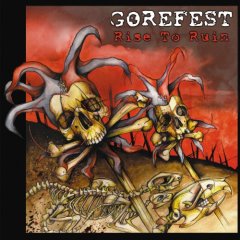 Gorefest are no stranger to controversy, but maybe not in the same way as most death bands I.e. depicting visceral images and singing about taboo subjects in a deeply disturbing manner-no back in 96 Gorefest completely about faced their roots and produced works of almost pop commerciality-subsequently it failed and the band fell silent 98. With ‘La muerte’ in place and signifying a welcome return ‘Rise to ruin’ represents Gorefest’s potentially most important album, it’s fortunate then that it’s so potent it could take the skin off bleach.

Death metal has, like most heavy music many naysayer’s and detractors; the vocals always being levelled as being gruff and undistinguishable the guitar sped up beyond clarity, the drums too repetitive to be coherent-unfortunately there are a lot of death metal bands out there that fall very short of the mark, with only a few shining stars, but executed well it can be brutal and elegant.

Jan chris de koeijer’s Vocals stride the edge of articulate and crushing so that the first listen you’re overwhelmed by them, then you understand them, then appreciate them.

There’s a strong political vibe to the proceedings, ‘Revolt’, ‘The war on stupidity’ & ‘a question of terrors’ firmly gunning at government and it’s associated evils. This is directed hate.

Gorefest have one hand clenched around more straight metals throat, and subsequently the guitar playing is more involved, more melodic and less scatological than is normally standard fare. The slow grind of ‘Babylon’s whore’s main riff and the tempered slow burn of ‘Rise to ruin’s solo raise Gorefest’s game. Things are more reflective and insular and the album burrows under your skin because of it.

All the key elements that made albums, ‘False’ & ‘Erase’ work are here but in many cases the whole machine seems to have been reverse engineered, yes there are similar sounds and moves but with a more controlled attack, like and orchestrated pile up.

Y’know it may well have been a good thing Gorefest experimented-ruffled the feathers and upset people, because otherwise they may not have had the epiphany that ‘Rise to ruin’ is.