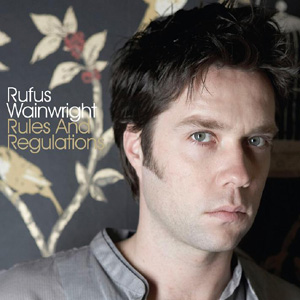 Country finally has its own Lloyd Cole, with slightly less profound insights.

With his name sounding like he’s a distant relation of Foghorn Leghorn Rufus Wainwright is a tough artist to pin down. Hate it when they run around like that.

At time ‘Rules and Regulations’ is a quirky country track, at times it sounds like it had been written for KD Lang, and at other times it sounds distinctly like a Divine Comedy off cut.

It’s not like a bouncer with a sore head, in so much as it doesn’t grab you off the bat, but there’s something curiously appealing about the track.

It starts off cutely enough, which is just as well considering the track begins with the line “I will never be as cute as you…”

You think you’ve got it summed up, but by the middle eight, you actually don’t know where the hell you are with the single.

Any intentions of being a standard chart hit are skewered slightly by a minor chord change in just the right place in the verse.

On its own it’s difficult to judge. It’s good, but I’d like to hear the rest of the album to put it in its proper context.

So for once, basically I’m reserving judgement until I’ve heard the rest. I think it would be unfair, as I think this was meant to be listened to as part of a whole.