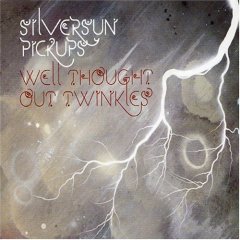 They might sound like an exclusive range of guitar accessories, or a pretty kinky dating agency, but the Silversun Pickups are neither.

They’re a Californian Indie Rock outfit, and ‘Well Thought Out Twinkles’ is a single straining to be heard.

The band beg comparisons to the Smashing Pumpkins, especially the earlier ‘Siva’ days. Theirs is a post Woodstock guitar grunge with melody. It’s the kind of thing uncle Kobain was striving for all those years ago.

And besides the sound they also have an attractive female bass player (who doesn’t these days I hear you say?)

Like the Pumpkins, the rock, the riffs and the attitude is carefully considered, at the risk of appearing fabricted.

Of course there’s only one Billy Corgan, but Brian Aubert’s vocals, while less resonant are strong enough to carry off the din swelling beneath him.

It’s music to get lost in, to meditate to and (God forbid) to dance to.

Repeat listening will make this one a sure hit, but it doesn’t quite crest emotionally the way the Pumpkins did.

A band on the rise though.