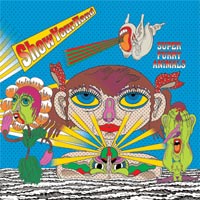 Something amazing is happening with the Furries.

Like some kind of Prog butterfly, they have journeyed from strange beginnings as a techno outfit, through a seemingly endless purple patch of psychedelia, electronica and all out weirdness whilst still always sounding like, well, the Furries. And their new single is no exception.

On ‘Show Your Hand’, they pitch up somewhere between the Beach Boys ‘Feel Flows’ and a strange Welsh entry to the Eurovision Song Contest, which exists only in the psilocybin induced mind of Terry Wogan. With its lush strings and irresistible chorus, ‘Show Your Hand’ feels like ‘Waterloo Sunset’ being wound through a sparkly sherbet mangle, retaining its Kinksian twee whilst losing all melancholic fibres in the process. The result tows the line between the folksy ‘Hello Sunshine’ and the pomp of ‘Keep the Cosmic Trigger Happy’, growing into a gem of a summer classic.

Rhys sings in his unmistakable hue, ‘delusions of grandeur can overcome anyone’. Interestingly, it seems that delusions of grandeur can overcome anyone except the Furries. For years they have taken their own inimitable route; from purple tanks at festivals to creating and finally killing off their yeti alter egos, from releasing the most number of ‘fucks’ in a song to ensuring that their contract with Creation Records did not require them to work on St David’s Day, their idiosyncratic approach makes them beloved to fans but often overlooked by the mainstream. But with a record of this beauty and the legendary Rough Trade giving it everything they’ve got, it looks like they could finally get some of the recognition they deserve.